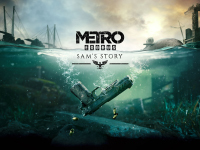 It has been a year since Metro Exodus graced our PC, PS4, or Xbox One and we have had a whole lot of time to dive into the open world to see what it had to offer. Then we had some DLC that came out to further expand and 4A Games had much more in store for us all. This is what brings us here today as we have a date and screenshots for the next big DLC for Metro Exodus to look at. Get ready to dive head-on into Sam's Story of the game on February 11th on all of those platforms so you can see how the lone American's story can play out in this world. We all knew it was coming and now here we are moving away from the Russian side of it all.

For those that need a refresher, Sam was the former US Marine that aided Artyom in the Metro story here but still wants to head back to the States see what has survived for him over there. It should not be a huge spoiler here that there are more locations across the world that survived the original nuclear war that broke out and made everyone in the Metro think they were the only ones left. It was a shock to the whole team and the survivors that there is more to the world again and this is the story of trying branch out even further. I do not think we will get to leave the wasteland we know, but it could lead to some fun other spin-offs in the universe here for future titles. Deep Silver and 4A Games today revealed more details for Sam’s Story, the second major story DLC for Metro Exodus, and confirmed that it will release on 11 February 2020.

Sam’s Story follows former US Marine Sam, a Spartan Ranger who has worked under Colonel Miller since the nuclear war devastated Moscow, and followed Artyom in search of a world outside of the Metro. Sam had long dreamed of returning to his homeland, and perhaps even finding his father alive. The prospect seemed impossible in the darkened tunnels of the Metro, but when the Spartans discovered that Moscow was not the only city left alive after the war, holding out hope didn’t feel so foolish anymore.

Sam, determined to find a way back to the USA, departed from the Aurora to make his way through Vladivostok’s tsunami-ravaged harbors, ruined industrial buildings, and crumbling residential districts. However, to complete his journey, Sam will discover that he needs every tactic he has learned so far to survive, as his surroundings prove to be far trickier than expected.

In this expansive ‘sandbox survival’ level, players will experience another gripping storyline featuring new characters, weapons, and mutant variants, in a huge, non-linear environment that offers hours of gameplay.

Are you excited to see more of Sam's story here in Metro or did you think the story was already over? Do you think we could actually see something outside of the wastes of the core game or will the story keep us solidly there still? Do you think we will get more of the expanded character stories in the future or would you rather move on to more of the game's world? Let us all know down in the comments what you are thinking and then feel free to discuss. When or if there is more for Metro Exodus, we will share it all here. Just be on the lookout for all of that and much more on the site.