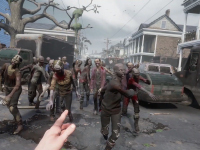 It looks like The Walking Dead: Saints & Sinners has shambled out there for all of those VR fans and PSVR fans to give a go and see just how the franchise does in the setting. It would seem that this would be the best path for the IP to go and Skydance Interactive has doubled down on doing so and making it viable. Shooting zombies in VR with all of the difficult drama of The Walking Dead could lead to some fun out there. I can see it and I am sure this is why the game was made. It is out there now, so we can stop speculating and dive right in.

For those that need a bit more before giving it all a go, we have a few new bits to look at for Saints & Sinners. One is some gameplay of the game, but all through the eyes of edited scenes and not direct gameplay. The other being more on the story and how it fits into The Walking Dead universe in general. This is its own stand-alone title, but it still needs to mesh in or it would be an obvious cash grab with just placing the popular franchise name on the game. You can see it a bit more below, but it looks like it will not tie-in much more to The Walking Dead than just the base setting and enemy types. Oh, and the options to let someone die or live with no other choices. Not like it is in real life, but just how everything is presented in the current TV show and most of the other versions that let you make choices. Maybe we will be surprised with something deeper?

Saints & Sinners is a game unlike any other in The Walking Dead universe. Every challenge you face and decision you make is driven by YOU. Fight the undead, scavenge through the flooded ruins of New Orleans, and face gut-wrenching choices for you and the other survivors. Live The Walking Dead’s dark drama in your own skin.

All of that said, I am still very interested in seeing how The Walking Dead: Saints & Sinners pans out here and if VR was the correct choice. The gameplay does make it look like we will have some truly frightening scenes to go through. I just wish that it looked like the story was going to have the same stuff mixed in and not a stand still with a loaded question style we always have. Sometimes I would like to just shoot a kneecap and walk away. Why is this not an option in more titles like this? Unless it is and then I will be back to praise The Walking Dead: Saints & Sinners for giving it up.

Have you been waiting for this addition to The Walking Dead franchise or did the VR aspect ward you off? Do you think we will have better choices here than we have had in other games in the franchise or will it still boil down to the same things? Could this be better suited in a true horror style game and not one that looks to be a narrative one at its core? Let us all know down in the comments and then feel free to discuss. If there is more to share for The Walking Dead: Saints & Sinners, we will share it all on the site. Just be sure to keep coming back to see and hear all of that in due time.