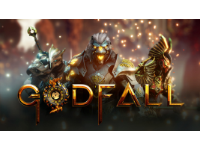 Just about a month ago, we all were introduced to Godfall, the first title announced for the PS5. The Looter-slasher being crafted by Counterplay Games and Gearbox Publishing. Not much more than the basics were shown off for the game back then, but that did not stop gamers from buzzing and wanting to see more. For all the various reasons. This is why we are back here with more for Godfall, as it looks like we might be getting our wish as some new gameplay video showed up online that could be the game in motion instead of the set piece that was put together to hype us all up.

Notice some of the vagueness I have here. I speak this why as it is not fully certain that this is actually for Godfall as it comes from a "leaked" source that has thus been deleted from Reddit. Sometime these things are true but sometimes it is someone trying to be internet famous and tricking the masses. Take all of that in before you dive into this new clip that could be for Godfall. It looks like it could be legit, but given that the end logo is a bit different than what we had before, it could be a fancy fake. We will not know until the team gives us a solid and official look. You can be teased for now though…

At its core, Godfall is a fantasy action RPG that utilizes high-impact third-person melee combat to engage players as they hunt for loot, don legendary armor sets, and defeat vicious enemies. As players face challenging missions in the world of Godfall, enemies and bosses will reward fans with head-turning loot as they are vanquished. Godfall can be played entirely in solo, duo, or three-player coop, providing fun for all.

What do you think about this possible footage for Godfall that we have here? Does it look like it will be more of a Souls-like style game or is it just what we have to look at that gives that feel? Is it a bit odd that there is no HUD at all or could that just be how the game is going here? Let us all know what you are thinking down in the comments and then feel free to discuss it all. When we have more to offer up for Godfall, you best know we will have it here. Keep locked in to the site to see and hear all of that before and after launch.