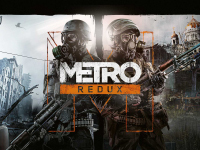 Good news for those who have been looking to get their dark Russian FPS on with the Switch, as Metro Redux will now be heading to the console there on February 28th. This would be the bundle of the first two titles in the video game version of the franchise from 4A Games that were then remastered for other systems. Now it looks like we are going to be getting it all on the Switch to be able to hunt mutants and survive the wastes of Russia all while searching the Metro. Hey, it is another title that we get to better pad our libraries that has been a proven solid entry. Do not knock it.

There is a main bundle for Metro Redux that will house some fun little physical extras, but will obviously house the Redux versions of both Metro 2033 and Metro: Last Light. Also all of the DLC that came with Last Light to add on the extra ten hours of gameplay content the other platforms have already had a chance to plow through. If the bundle is not your jam, you will be able to pick up both titles separately, but digitally, on the e-Shop so you do not have to think you are going to get forced into buying a bunch of games when you might only want one. It is an option, but I think you may be missing out.

Deep Silver and 4A Games are proud to announce that Metro Redux, the ultimate double game collection, including the definitive versions of both Metro 2033 and Metro: Last Light, will release on Nintendo Switch on 28 February 2020. Developed in-house by 4A Games, and containing two complete campaigns which combine to create one epic solo adventure, Metro Redux will immerse players into one of the most atmospheric worlds in gaming, fully brought to life on their Nintendo Switch.

In addition to both campaigns, Metro Redux contains all the Metro: Last Light DLC offering a further 10 hours of bonus content. Players can experience life in the Moscow Metro through two unique Play Styles: use the “Survival” Play Style to approach the campaign as a slow burn survival horror or tackle it with the combat skills of a Ranger with the “Spartan” Play Style.

Purchasers of the boxed edition of Metro Redux will find both games and all DLC on one 16GB cart with no additional download required; The Ranger Cache pre-order pack is available at selected retailers and contains a Metro Redux pin badge set, Game case sleeve, Double-sided alternate artwork inlay, 4 double-sided art cards, and an A2 double-sided poster.

Those who prefer to download digitally can purchase Metro 2033 Redux and Metro: Last Light Redux individually from the Nintendo e-Shop.

Have you been waiting for Metro Redux to hit the Switch or have you played both titles enough on the other platforms to where you will be ignoring this one? Do you think that this could mean another title in the franchise could be coming and this is a way to bring in some development funds? Would you rather buy them individually or as one big package to behold? Let us all know down in the comments and then feel free to discuss. I am going to say we will not have more on Metro Redux any time soon, but if there is anything for the franchise we will have it here. Just keep checking in for all of that.