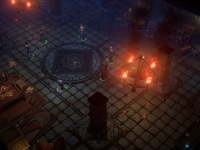 The first screenshots for Pathfinder: Wrath Of The Righteous are here to show us just how Pathfinder is going to push forward

Not too long ago we all caught wind that Owlcat Games was going to be working on a follow up title to their last one by way of Pathfinder: Wrath Of The Righteous. Another of the big adventure paths from the tabletop franchise that so many gamers out there enjoy. Their last title being Kingmaker along the same vein of it all. This is not the news at all here but just a bit of background before we dive into everything else. Everything else being that the team is heading out to kick off a Kickstarter campaign to get this next Pathfinder title up and running on February 4th. Kind of an odd choice on things here, but if it gets the game made I will deal with some of the odd.

While it is nice to know that we will soon be able to help make this next title a reality, it would also be nice to have a look at where the game is just before all of that goes down. This would be the bigger reason why we are all here today, as we have our first few screenshots for Pathfinder: Wrath Of The Righteous to look at and see where this IP is going. More or less, it looks a lot like Pathfinder: Kingmaker but it will have a vastly different story, a few more character classes to play with, and a slew of new NPCs and monsters for us to slay. If you know the adventure path at all, then you will know what is coming. If not, have a look at these new images and see just about where we can all expect to head when this title is finally made. As the second venture into the exciting world first explored in the successful Pathfinder: Kingmaker CRPG, Pathfinder: Wrath Of The Righteous will expand the property’s universe and immerse players in an exhilarating crusade between mortals and demons. The game will give fans the opportunity to steer the conflict and choose from one of several different Mythic Paths, each with its own unique influence on warfare. As players rise in power, they will discover how Wrath Of The Righteous evolves the CRPG genre through its sheer narrative and scale.

As proof of its commitment to improving this strategic layer of gameplay, Owlcat has revised the Kingdom Management system found in Pathfinder: Kingmaker to match the new narrative and setting in Wrath Of The Righteous.

In Wrath, heroes must fight to reclaim their land from the demonic forces that have conquered it. Recapturing the strategic, heavily fortified city of Drezen in order to convert it into the headquarters from which the crusaders can wage war won’t be easy, as players must carefully consider the allies and war assets they rely upon. Players’ choices of alliances will drastically influence outcomes later in the game and shift the relationships they forge with some of their companions.

Did you expect that they would shift things up for this Pathfinder title or did you suspect that they would reuse a bit to help save on time and world-building? Do you think that we will see a different gameplay mechanic mixed in now that the Kingdom Building system is not truly needed or will they just go with a straight adventure for it all? Do you find it odd that they are having to go through Kickstarter to get the game going again or does that make sense to you somehow? Let us all know down in the comments and then feel free to discuss it all as you wish. We will have more for Pathfinder: Wrath Of The Righteous as we head on into the future and you can be certain it will be on the site for you. Just be sure to keep checking back in for all of that.