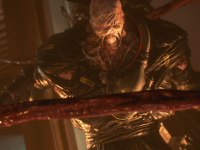 We all knew the Nemesis was going to be back for Resident Evil 3 and getting a new look to him. It would not be the same game at all if we did not have him stalking the streets and in turn us in the game. That is why it is almost no shock that Capcom has offered up a new trailer to show off the character and how he will look and act in Resident Evil 3 here. Something that many fans have scoffed at based on the concept art before now and only tried to figure out how he will finally look here. Now we no longer have to speculate and can see him in motion just before the April 3rd release on the PS4, Xbox One, and PC.

In addition to the Nemesis here, we also get a bit more of a look at some of the other bioweapons we will have to dodge in Resident Evil 3 and some of the supporting cast of U.B.C.S. members in the area. These would be the people Umbrella sent in to help cover up the original breaches from the past titles for those not fully up on their Resident Evil lore. All of whom have a nice little update to them and a bit of a shift to go along with this remake. You do not need to take just my word for it and see them all in motion below along with some stills to get a better look.

The new trailer and screenshots also provide a closer look at more of the characters in Resident Evil 3:

Does this get you all amped up for Resident Evil 3 now or do you still need more to get that ball rolling? How do you think Mr. X will work in here after the nice little tease at the end of the video? Do you think that the story will make a bit more sense here than before or will we just get the horror-action we have all been waiting for and damned be the story of it all? Let us all know down in the comments what you are thinking and then feel free to discuss. When there is more to offer up for Resident Evil 3, we will have it all here. Just keep checking in on the site for all of that and much more.