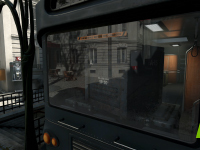 It has been a solid run for Wolfenstein: Youngblood since it launched and we have seen various updates and patches go out for the game over the PC, PS4, Xbox One, and Switch versions of the game. It is the nature of the beast at this point and Machine Games has one more out there for us if we are still playing the game. Or if we are diving in for the first time on PC after the holiday season. Either way, we have a new visual update for Wolfenstein: Youngblood that adds in all of the big buzzword visuals stuff for the game. Things like Ray Tracing and all that to make the world of the game look a bit more rich and realistic. You know, because that has to be a thing now.

As you will see below, the new update for Wolfenstein: Youngblood does improve many of the visual aspects of the game if you have the hardware to do so. It is obviously assumed that we will have the latest graphics card and everything from NVidia here but it does look rather impressive. More or less, this is just a reminder that the game is out there and then we can expect Wolfenstein: Youngblood to be on par with the current titles coming out almost seven months after this one did. Isn't technology fun to try to keep up with?

Does any of this make you want to go back and replay Wolfenstein: Youngblood or will it be the way you experience it for the first time? Will you actually be able to run the game with the new settings or was this just a tease for things you cannot get? Will this, at least, be the way all of the future titles will be going here and we can expect fewer updates like this going forward? Let us all know down in the comments and then feel free to discuss. If there is more to update for Wolfenstein: Youngblood or the franchise in general, you know we will have it here. Just be sure to keep checking in for the latest and greatest.