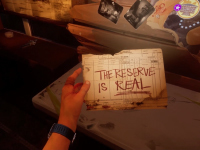 With so many games in the universe of The Walking Dead, it seems like things are going to just get recycled and reused. It is hard to keep things feeling fresh and flowing, but it looks like Skydance Interactive is working hard on it and trying to give us one more entry into the franchise. Something that could be hard to do, but we may just be seeing that here in The Walking Dead: Saints & Sinners, as we have a new look at the story and how it will all flow into the VR form of it all. It does seem like something that could be a bit difficult given the platform.

As you will see below, it looks like we will be playing an outsider to the New Orleans of The Walking Dead but we are still somewhat known for our scavenging skills. The three different factions in the area will be asking for our help, or demanding it, to help the political strife continue in a world where the dead walk the Earth. There will be the usual "hard choices" that The Walking Dead is supposed to be known for, but it is hard to see how that will flow into some solid consequences when the VR side really presses for the zombie killing and scares. I guess we will see how it all flows based on this bit of new story info we have for the game.

“You don’t have to choose between story and skull-splitting. You get both with this game.”

Saints & Sinners is a game unlike any other in The Walking Dead universe. Every challenge you face and the decisions you make is driven by you. Fight the undead, scavenge through the flooded ruins of New Orleans, and face gut-wrenching choices for you and the other survivors. Live The Walking Dead’s dark drama in your own skin.

Are you still amped up for this version of The Walking Dead or is it a franchise that should be put to rest at this point? Do you find it about on par with the three different factions we will have to deal with and how our choices will be between them? Do you think that there will be serious consequences from our choices or will it all still be a VR zombie killing game? Let us all know down in the comments and then feel free to discuss. If there is more for The Walking Dead: Saints & Sinners, and we know there will be, it will be up on the site for you. Just be sure to keep checking in here for all of that and much more.