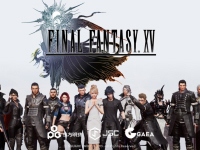 There has to have been some of you out there that were hoping to get a new MMO set in the Final Fantasy XV universe and for mobile. I would have to believe this as it looks like that is something that is in development right now with images and everything. Not directly from Square Enix this time, but something that will be following the main story from Final Fantasy XV that will try to expand on the Noctis story and add a few new regions we have not played in the original title. It is an odd thing to find out, but it is something to take note of.

Not much else is known for this Final Fantasy XV mobile game, but it is going to be developed with the Unreal Engine 4 and use the touch-screen controls that are all the rage on the mobile devices. When it is all said and done, it will launch in the Chinese market and then move to a global release at some point. If you were looking for yet another way to play more for Final Fantasy XV for some reason right now. I am still not sure how I feel about it all right now, but it is a thing.

Did you expect to see a new MMO set in the Final Fantasy XV realm or did you think we were all done with that? How far out do you think it will be before the global release and will it be worth the wait? Are you curious as to why this is even a thing in general or does it all make sense to have here? Let us all know what you are thinking down in the comments. If there is more for Final Fantasy in general, we will have the information for you here. Keep coming back to see and hear about all of that.