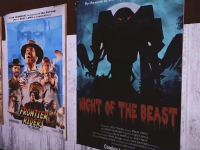 It feels like we just got a nice big DLC drop for The Surge 2, yet here we are talking about the next one that is going to be dropping on us all on January 16th here for the PS4, Xbox One, and PC. I am not saying it is not a bad thing, but it is a sign that Deck 13 is still churning things out at a rapid rate and keeping the game flowing and growing as we would all want it to. Especially when we get more than just weapons and gear thrown into the mix and a whole new story section for The Surge 2 with a new, big, bad boss to take on when all is said and done. I am going to guess it is called the Kraken based on the name of the DLC here.

You can get a nice little tease and taste for what is coming to The Surge 2 here in a little over a week, if you look below. It has a weird 1950's feel to it all but it is all supposed to take place on a decommissioned aircraft carrier that has been retrofitted as a nice little retreat for the rich and famous. I am not certain I am getting that from the new trailer here for The Surge 2, but maybe when we dive into the DLC a bit more it will make better sense. We do not have long to wait, so that is a good thing to look at for it all.

The Surge 2 — The Kraken

Deck 13’s acclaimed Action-RPG The Surge 2 today announces the release date for the upcoming Kraken expansion, which comes to PlayStation 4, Xbox One, and PC on January 16. Check out the newly unveiled teaser trailer above, for a glimpse of the retro-themed suburban environments you’ll soon be exploring.

The Kraken expansion adds hours of narrative-driven content with a brand-new storyline and location, as well as a wealth of new weapons, implants, and armor to discover and craft. On the outskirts of Jericho City, enter the VBS Krakow, a massive decommissioned aircraft carrier retrofitted as a retreat for the rich and famous. Battle robot pirates, deranged security systems, and an imposing new boss, each with their own unique combat mechanics. Fight hard and uncover the truth behind the desolate military vessel!

Get every DLC with the Premium Edition of The Surge 2, which not only includes the Kraken Expansion, but also has plenty of new content to discover such as the URBN Gear Pack, the Public Enemy Weapon Pack, and the latest Jericho’s Legacy Gear Pack.

Are you ready for some new DLC for The Surge 2 here or are you still trying to get through the last DLC still? Do you see the decommissioned aircraft carrier working as expected here or is it just background noise to the rest of it all? Do you suspect that the robotic tentacles will be part of the Kraken or will that be something different we will all have to deal with? Let us all know down in the comments and then feel free to discuss it all below. For more on The Surge 2, be sure to keep checking back in here. We will keep all of the news and updates flowing to you as best as we can.