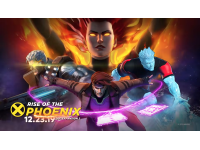 The next DLC for Marvel Ultimate Alliance 3: The Black Order is here and ready for you to add to your Switch if you have the Season Pass or not. You will just need to drop a bit of the extra cash out there if you do not have the pass as of yet and want to get the new characters that Team Ninja has added in for the game. That and see the new level cap for Ultimate Alliance 3 or experience the new Danger Room mode. Seeing as this one is a big X-men dump of characters, it makes sense that we now have this mode added in. Even if it is a bit odd to have the multiplayer aspect added in this late in the game. So to say.

If you missed the big announcement all of the other times it was let out there for Ultimate Alliance 3, this DLC bring Phoenix, Gambit, Ice Man, and Cable into the game with all of the powers and abilities one would expect with them. Then you have the Danger Room that adds in a competitive multiplayer mode where you will have to take on bosses, enemy waves, and the like you can imagine in this mode. The difference between this and the other mode is that this one will randomly spawn in buffs, debuffs, and other aspects into the mix to shake things up even more. It would seem odd if there was not much else for the mode based on what we have had already for Ultimate Alliance 3 here.

Marvel Ultimate Alliance 3: The Black Order — Rise Of The Phoenix

Dark Phoenix, the infinitely powerful cosmic entity from one of the X-Men's greatest sagas, unleashes an era of fiery destruction! Four more X-Men join the alliance — Phoenix, Gambit, Ice Man, and Cable — with the purchase of the Marvel Ultimate Alliance 3: The Black Order Expansion Pass.

Face-off against friends in the newly added Danger Room mode! Up to four players will compete to see who can take down the most bosses while being barraged by buffs and debuffs.

Have you been waiting for this bit of DLC for Ultimate Alliance 3 here or will you be looking for the next one with the Fantastic Four? Do you think it makes sense that the Danger Room will add in all of the randomness or should it be something we can set? What do you think the next DLC will add in when it comes to this part of the game? Let us all know down in the comments and then feel free to discuss. If there is more for Marvel Ultimate Alliance 3: The Black Order, we will share it all here. Be sure to keep checking in here and we will make sure to get you all of the fun news.