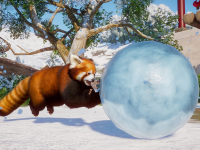 Things are getting cold out there and that means it is the right time for the next expansion for Planet Zoo to be released. Given that it is the Arctic Pack that will add a bunch of the snow and colder climate animals into the mix, it is fitting for the time of year. Not that Frontier Developments was aiming just for that, but it is fitting and will carry along after as it also adds in some new narratives and areas of the world to build zoos in. Thus further expanding Planet Zoo into a full world and not just select biomes and locations. Just as one would expect here on the PC right now.

In this new expansion, we are going to see both Norway and Mexico added in to Planet Zoo for us to build in. Norway makes sense as most of the new animals will fit in and Mexico added to give us the extra challenge to keep these colder climate creatures alive and happy. It is not often that you would see a Polar Bear, Arctic Wolf, and a Reindeer in that hot of a climate. The Dall Sheep are a bit more likely, but I am sure they will have the same challenge in Planet Zoo just to keep things interesting. Have a look at the new animals and locations in the latest trailer. Then pick up the expansion if you want to add these little beasts in on the fun.

Are you ready for an ice-cold adventure in a wintery wonderland? Join Bernie Goodwin in two new chilling Scenarios as you tackle the challenges of the northern hemisphere. With over 200 new building, scenery, and foliage pieces there's also lots to get creative with!

And of course, Planet Zoo: Arctic Pack features four brand new animals to take care of: the Reindeer, Arctic Wolf, Dall Sheep, and Polar Bear all come with new challenges and specific needs — be sure to check the Zoopedia for tips on how to keep them happy and healthy.

How excited are you to see that these animals are added in to Planet Zoo now and will you be looking to add them into your current builds? Do you think it is going to be too difficult to keep them happy in the warmer climates or will it be just as possible as it is in the real world? What do you want to see added in next as well as where? Let us all know down in the comments. When there is a new update for Planet Zoo, I will add it to the site for you. Just be sure to keep your eyes open for all of that soon.