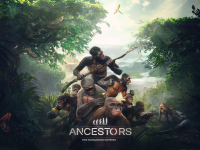 We sit down and review Ancestors: The Humankind Odyssey. A survival game that aims to take us through the creation of humans. Here is our review of Ancestors

It seems more and more that video games are used in more ways than just entertainment and here we go with another that aims to educate in a way with Ancestors: The Humankind Odyssey. Well, not really educate in the normal means when we get those kinds of video games, but in a way where Panache Digital Games takes us on the long journey to where we all are today. That is at the core of things for Ancestors, as well as a survival game that pits us against a prehistoric world. Does it truly hit the mark or should it be left to become a fossil in the world of gaming? Here is our review on how everything unfolded for this title.

Take a trip back over 10 million years ago when the first mammal and ape developed to stand upright. This is where our story begins and sometimes where it ends. Help your newly named ancestor to grow, learn, and teach his tribe of apes to maybe be able to survive the harsh world out there. That or maybe cliff dive to your death. You only hold the fate of all humanity in your hands way before it was even a thing. When it comes to survival games there is one thing that is usually a staple and sometimes hurts instead of helps a game. In Ancestors, and many others, it is the limited in-game help and aid to navigate the game. This is a nice feature when it comes to a world where you are exploring blindly just like the character you are playing. What does not help is when you have to do the same thing for the controls and mechanics of the game. Even in the tutorial mode of Ancestors: The Humankind Odyssey, the game seems to go out of its way to not teach you how to play and leave you on your own. Even with the basics, you need to even progress in the game. While I understand the mentality of it all, if you want someone to play longer than an hour it is nice to explain how the control and even gaining this game's "experience point" would be nice to know so you are not just restarting from scratch and hunting online for what to do.

Once you are able to get past the unknown of how to even play the game, things move forward into another weird instance for Ancestors where you are forced to learn more of the game but not ever understand. I am talking about the weird audio cues in the game that we are supposed to know when trying to do anything. I am talking in terms of stripping materials and even bonding with your mate in the game. There is nothing but a sound that plays in the game to indicate you have to release a button, but it more or less still comes down to a random chance as there was never a rhyme or reason behind it in my playthrough. Sometimes things would work, other things would be destroyed, and others nothing would happen. All with the same timing. Again, this does not make for a fun experience when you are guessing on how the mechanics of the game work and to progress forward.

Lastly, and this might have just been me for Ancestors, there never really felt like a reason to build anything in the game even though there were mass amounts of options. I am talking in terms of most tools and structures that were available as your mind expanded in the game. I spent a lot of time building walls and barricades around my tribe's settlement in one game to make sure we did not get attacked by predators. In another, I built nothing. Both gave the same results with one taking a lot less time to accomplish. It is nice to have the option in the game, but make it actually worth something that a player can see, as I never did and could have spent more time exploring and fighting off the character's fears instead. Odd, since building shelters are usually a huge thing in these style of games.

I may have griped a lot on Ancestors: The Humankind Odyssey above, but there were some amazing elements that obviously kept me coming back. One of the bigger ones had to be the design and structure of the biomes and environments in the game. At first, it all felt like it was going to be the same over and over, but that is only until you truly start to explore the world. Even as of this writing I am finding more hidden caves and areas in Ancestors for me to explore and build upon with my clan. It felt like a living and harsh world that would have been around at that time. The team over at Panache Digital Games did an amazing job and making the world be a character just as much as the other apes you get to name in the game. It is truly remarkable.

Now, while the controls of the game may have been something I did not want to have to dig and learn for in Ancestors: The Humankind Odyssey, once past all of that it truly shines in the game. Heading out and exploring the world was just as fun and frightening as the character in the game was going through. We might find a nice little mushroom patch to get food from or we might get mauled by a tiger. It was the risks and rewards we needed to take to see if we could outpace science in the evolution along the way. That sense of wonder came through just as perfect for me as I could imagine any of my clan would feel in the game. In that aspect, Ancestors did a top-notch job. From the fear of the unknown to the enjoyment of figuring out what something is in-game, it was conveyed so perfectly.

The last part of Ancestors I need to praise has to be its advancement system. Not only in layout and design, but also in terms of the metagame played as well. As more tasks and things are done in Ancestors the neurons of the brain can be filled in and lead to remembered tricks and other upgrades to the character. When it comes time to advance to the next generation, though, you are limited to the number that gets to carry over and the rest need to be relearned. It then became an interesting struggle with each generation to figure out what I could work without from the start and which things I needed. It also felt like the perfect way to show the nurtured and natured elements of the human brain, which was one of the goals of the game in the first place. Truly well done. I will need to say this upfront, but Ancestors: The Humankind Odyssey is not going to be a game for everyone. There is absolutely no hand-holding in the game and this goes even to learning the controls and actions in the game. If that is something you enjoy, then, by all means, pick the game up. If you are a fan of knowing how to play the game in the first place, you are going to be upset quickly. Thankfully, Ancestors shines a bright light for those who can get past the hard learning curve at the beginning of it all. A curve that can be "cheated" by searching around online for the little tips. Even if that will sour a bit of your experience in the game and thus the odyssey you are supposed to be taking with the clan. Take all of that as you will before choosing to dive into this one.

I give Ancestors: The Humankind Odyssey 16 Neural Nodes on the Neural Node scale.

Ancestors: The Humankind Odyssey was developed by Panache Digital Games and published by Private Division for the PC on August 27th, 2019 and the PS4 and Xbox One on December 6th, 2019. A PS4 copy of the game was provided by the publisher for reviewing purposes.