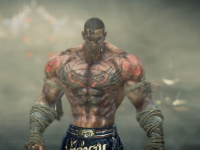 Look no further for the next character that will be heading toward Tekken 7 here as we now have a visual to go along with it. Here we have Fahkumram that will be bringing his Muay Thai style into the fight via the Season Pass DLC that Bandai Namco is still rolling out. We are in the third season of it all and have four more characters getting added into Tekken 7 when all is said and done. One more is to hit the PS4, Xbox One, and PC versions soon but for now we will focus on the next character shown off and to come at a later date as everything rolls out.

There is no doubt that this one looks close to a non-Tekken character that will remain nameless who also uses the same fighting style as he towers over his opponents. I am sure that is all coincidence and nothing further to read into, but given the stir he caused when announced at the Tekken World Tour Finals, it needed to be mentioned. Nonetheless, he will be joining the roster and putting all kinds of hurt on the rest of the fighters out there. Have a look at Fahkumram in action and then get ready to wait until this DLC drops.

What do you think about this new character coming to Tekken 7 here? Do you think his likeness and style are an homage or a rip-off of a different character in a different franchise? When do you think he will actually grace the likes of the game and will he be the final character to get added into the mix here? Let everyone out there know what you are thinking and then feel free to discuss down in the comments. If there is more to share for Tekken 7, you know we will share it with you here. All you have to do is keep coming back for all of that and more.