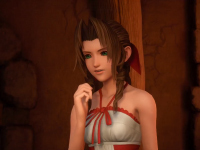 We had a few teases last week when it came to the upcoming DLC for Kingdom Hearts III and now we are back to say… we finally have a release date for it. Not only a release date, but a nice little trailer to try to explain what Square Enix is bringing us here soon. Soon for the PS4 gamers as it looks like the DLC will hit their Kingdom Hearts III on January 23rd with the Xbox One gamers having to wait until February 25th to get it there. It really does bother me when we have horrible split release schedules like this. It makes it hard to not let the spoilers out…

Anyway, we now have the dates for when we will have more of Kingdom Hearts III to play and we also have a nice look at the Final Fantasy characters that will be rejoining the fight. I think I see a nice little Cloud hint in there too. Just after we get a chance to see that we will get to fight as Kairi in the world of Kingdom Hearts while trying to uncover a bunch of hidden truths. The way these things always go. Sadly, there is not much more to go on with descriptions so I will just let you have at the latest trailer for the DLC here. Have a look and enjoy.

ReMIND — the other tale that unfolded during the climax of Kingdom Hearts III. Determined to rescue Kairi, Sora travels to the Keyblade Graveyard a short time before the final battle was to take place. Lacking a corporeal form, he traces the hearts of the seven guardians of light. Through experiencing their personal battles firsthand, Sora is about to discover truths that he has never before imagined.

Are you glad to finally know when the DLC will be hitting Kingdom Hearts III or are you a little upset with the weird split again? Do you think we will get a lot of game time with Kairi here or will it only be some little sections? How much more do you want the Final Fantasy characters in the game and a less convoluted story to experience? Let us all know down in the comments and then feel free to discuss. For more on Kingdom Hearts III, be sure to keep checking back in here. We will keep all of those updates flowing out there as best as we can.