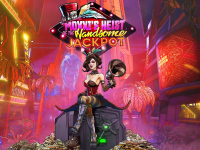 It feels like December 19th is still so far away and we are having to wait forever to get the new DLC for Borderlands 3. Something that has been teased and shown off to us so many times already, albeit in smaller forms, but something that Gearbox has been getting us all ready for. We still have two weeks to wait for the full DLC but that does not mean we cannot get one good, long look at what will be coming to Borderlands 3 when it does finally drop. All right now if you so choose to spoil some of the gameplay just before. Think of it as an early holiday gift or something?

Joking all aside, here we have the first thirteen minutes of gameplay from the upcoming Borderlands 3 DLC. This would be the Moxxi’s Heist Of The Handsome Jackpot one that is part of the Season Pass and should be available as a standalone too. As the name describes, we are joining that "Sunnova Bitch" Moxxi on a caper to strike back at one of Borderlands' famed villains. Amongst all of the other loot and goodies that will come with it too. The bigger focus here, though, is that we can see how the humor and feel of the character is still alive and well even though he has been put to rest for so long. Have a look and get ready for that DLC to drop on us soon-ish.

Moxxi’s recruiting you to seize control of a derelict space station built by the infamous Handsome Jack back when he was still president of the Hyperion corporation. The Handsome Jackpot is quite possibly the gaudiest gambling spot in the galaxy, with neon signs, slot machines, and gold statues all over the place. It’s also crawling with multiple models of deadly Hyperion Loader Bots, as well as lunatic looters who’ve been trapped on board ever since Jack’s death.

Moxxi’s Heist of The Handsome Jackpot is tuned for characters who are at least level 13 but will automatically scale up so that higher-level Vault Hunters can find a challenge and appropriately powerful loot. In order to access this content, you’ll need to have unlocked Sanctuary III, your space-faring home base that you reach at the end of the campaign’s prologue.

Are you fully ready for this Borderlands 3 DLC or did you need this jab to get you in the spirit? Do you think we are going to see more of Handsome Jack in the coming DLC or will this be one of the last times we see him, again? Do you even car and just want to get to the loot and other unlockable items instead? Let us have all of those thoughts and feelings down in the comments and then feel free to discuss them. As more for Borderlands 3 drops out there in any form, we will have it here just for you. All you have to do is keep coming back here to check it all out.