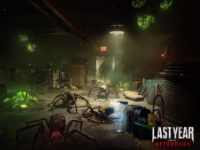 About this time in 2018, we all had a chance to have a look at Last Year as it dropped on the up and coming storefront over on Discord. Well, at least, we had a short chance to as we and Elastic Games watched as their project fell into the wastes as the storefront went away. It was a sad time and many that fell in love with Last Year were left in the lurch wanting to see the game make a comeback. Before now, there was no real word on it all, but we can now see that we will be able to play the next chapter of the story over on Steam as well as pick up the original there again if you were left wanting from the Discord fallout. Yes, there is a way to keep the fun 5 v 1 gameplay going is the first thing you should take from this.

The first bit of good news there is that anyone that had picked up Last Year: The Nightmare on Discord will be getting a free copy of the game on Steam. Not only that, but on December 10th here, we will see the Aftermath chapter drop out there for free too. This one will bring the same style of gameplay but add in a new fiend in the way of The Spider. This will change the look of the school and the students in the various ways we would think along with some other fun updates for Last Year we can all experience and enjoy. It is a fun little tale that leads to all kinds of horrors. Horrors you can see in action just below if your heart can take it.

Elastic Games is a passionate 20-person indie team based in Montreal, Canada. While small in size their diverse team includes industry veterans from much bigger players like WB and Ubisoft. They’ve used that experience and passion in creating a truly unique survival horror experience called Last Year. A 6-player match game, where 5 players work together as a Team of Classmates trying to escape and survive the night, vs the 6th player who is the Fiend, hunting the others down, and murdering each in the most gruesome ways possible. They launched the prologue Chapter, Last Year: The Nightmare, at the end of 2018 exclusively on Discord’s new app store that was designed to compete with the likes of Steam.

They immediately found a massive community ready for such an innovative offering. But within months, Discord unexpectedly shut down their storefront and Elastic lost their only platform and publisher. They now had angry fans who wanted their game back, and no way to get it to them. Without a storefront, they couldn’t do something as basic to business as sell their product. Most small companies wouldn’t survive this scenario. The easy answer would be to port the game to Steam but they knew that was a disservice to the community. The players wanted real change. So, they put their heads down and pushed through the darkness. They poured in their blood, sweat, and tears all over again but this time they had the feedback the community had given them.

Using that feedback and learning from their mistakes they spent the last 12 months building an amazing new chapter to be launched on Steam on December 11th, 2019. The incredible community around Last Year has been the engaging force that Elastic Games needed to keep going in 2019, even when everything seemed to be falling apart. As a special thank you to that community who supported them and purchased Last Year: The Nightmare, Elastic is gifting them all with a free copy of the game on Steam, which includes a brand new expansion, Chapter 1: Afterdark! Were you one of the ones affected by all the drama Last Year has gone through or will you be picking it up when it hits Steam here soon? Were you curious on how the chapters were going to progress too or do you want to skip this one and its eight-legged freaks? What do you think will be the next fiend to drop in the game or is it still too soon to start to think about all of that? Let us all know down in the comments and then feel free to discuss it all. As we find out more for Last Year and its future, we will share it all here. All you need to do is keep coming back to check on the site.