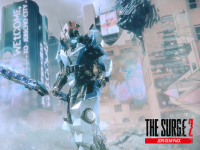 It looks like there is more loot out there for you to scavenge in The Surge 2, as we have the JCPD Gear Pack out there for the PS4, Xbox One, and PC versions of the game. As in out there right now for those who have picked up the latest update for the game that Deck 13. I am sure that you have and you did not even know it. That is the loveliness of having auto-updates for The Surge 2 turned on while you are away from your system. Then you can boot up the game and know that there is more to find and wear around Jericho City while surviving the event that occurred.

There does not look to be much more to any of this besides a new look for The Surge 2 to show off and a few new weapon designs. There is no word that they will do much else besides just basic stats and all, but you can see some of what is coming just below in the following screenshots. I mean, it is all free and outside of the Season Pass of DLC, so there should not be much in the way of complaining. It is just one more thing to use in The Surge 2 to keep all of your fun rolling right along.

The Surge 2, the hardcore Action-RPG from Deck 13 and Focus Home Interactive, continues to expand its collection of futuristic loot with the release of its second free DLC – the JCPD Gear Pack – containing a whole new set of armor and four new implants. Available right now on PlayStation 4, Xbox One, and PC, players can get a good look at what awaits them with today’s new screenshots.

Jericho City scientists have cooked up new toys for players to hunt down and acquire, such as the JCPD Team Zola armor set, which is all about generating stamina to keep those combos going. Combine it with the Omni-Cell Battery Converter Implant which converts batteries into drone ammunition, and you can keep slaying without pause.

The free JCPD Gear Pack is available right now on PlayStation 4, Xbox One, and PC for free. All future DLCs will be included in The Surge 2’s Season Pass, available for purchase on all platforms. Season Pass owners will also get a 48-hour head start on January’s The Kraken expansion, where they will explore new areas with new deadly threats.

What do you think about these new looks that are here for The Surge 2 and will you be hunting them down as soon as you can? Do you think that there will be a bit more than just stats for them or will that be it to keep things easy? What do you think will be the next big thing in the paid DLC department of it all? Let us all know down in the comments and then feel free to discuss. When there is more to share for The Surge 2, we will share it here. Be sure to keep checking back in for all of that and much more.