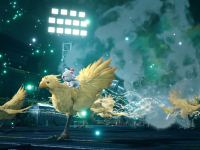 We have all been waiting patiently and now we have more to see for Final Fantasy VII Remake in form of screenshots that show off all the various new and old things coming to the game. Sure, it would have been nice to have some new video or gameplay from Square Enix but we will take what we will get here. More so when we get to see more of the Materia and Chocobos running around in the world. All things we knew were going to be back here from Final Fantasy VII, just something that we have not been given a full rundown on as of yet. It is just nice to see and know a bit more on how it will look and maybe not flow.

Some of that we have seen before, and now we also have a look at how the Buster Sword upgrade will work and look in Final Fantasy VII Remake. It also shows off how the Materia will be linked in there too. Something that will work a lot different than we saw before with the basic version of Final Fantasy VII. That is to be expected, though, as it is a full remake and they are going above and beyond for it all. That is the basic assumption and hope. We will not stop you much longer from looking at the new screenshots. There are way more words to be found in them than I can offer up right now.

Have you had your sensory overload for Final Fantasy VII Remake yet or do you still need more to blow your mind for the game here? Do you like the new look and feel for some of the systems or do you think that they should be altered a bit more before launch? Do you even care and are just focused in on the Chocobos and Moogles yet again? Let us all know down in the comments and then feel free to discuss. As more for Final Fantasy VII Remake gets out there, we will update you all here. All you have to do is keep checking in for all of those and much more.