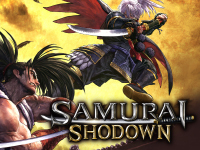 Many gamers have had a chance to enjoy Samurai Shodown for a while now, but those pesky Switch gamers seem to have been left out for a bit longer. I am sure there are some good reasons for that and SNK is working on it. Why wouldn't they want as many fans out there enjoying their game? Nonetheless, it looks like those looking to play Samurai Shodown on their Switch have a new timeline to look forward to. You can now look for the game to hit in Q1 of 2020. Not the most defined of timelines, but it is something to look at and get excited for.

While it is a broad range of dates that we could see Samurai Shodown drop on the Switch, there is a bit of a silver lining. That is, if you opt to pre-order the game now and before its launch, you will be treated to a Neo-Geo pocket version of Samurai Shodown 2 from the gaming days of yore. A nice little retro gaming experience while you wait. Sure, it doesn't help that your non-Switch friends can be playing it all right now, but it is something. This is why it is always best to spread your gaming love to multiple platforms out there and not just the one.

The weapon-based fighter Samurai Shodown is slated to release in North America during Q1 of 2020 for the Nintendo Switch!

The battle cuts its way into the Nintendo Switch line-up!

From its creation in 1993, the Samurai Shodown series has redefined weapon-based fighting games. 11 years after its most recent release comes a brand new addition on the Nintendo Switch! Experience the fighting game that took the world by storm!

Is this a bit too long to wait for Samurai Shodown to finally come to the Switch or is it still going to suck you right in when it does? Will you be getting it here so you can get the extra little retro game or is that a little offer that will not bring you in? Are you curious as to why there was such a delay between all of the launches out there? Let us all know down in the comments and then feel free to discuss. For more on Samurai Shodown, in any of its forms, be sure to keep checking in here. We will have it all as we head forward into time.