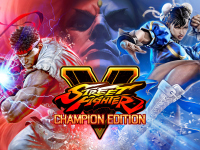 We might be heading back to the weird counting from Capcom again as we have word now that Street Fighter V: Champion Edition is on its way to us with all of the stuff we know and some new stuff for the PS4 and PC. Just as one would assume, it is another edition that will hold all of the characters, stages, and everything from the previous versions of Street Fighter V, but with some new DLC and extras mixed right in. It is kind of odd again, but maybe if you have missed out on the game to date, you will have a chance to play it all and more this coming February 14th. If you are still reading all of this, it may just be the edition of the game just for you. I guess…

No matter the case, Street Fighter V: Champion Edition is coming and on top of all of the current DLC all being in one place, we also get to see that all characters will be getting a second V-Skill 2. All of which to make each of the characters feel a bit newer in the mix. Also, they will all have some balance tweaks mixed in to keep things on par moving forward. All of which feels like something could have just been a basic update, but who knows? Just like the addition that all players of Street Fighter V will gain access to the cross-play feature with their current and future versions of the game. More of the things that could have just been an update…

Rule the ring with Street Fighter V: Champion Edition, the most robust version of the acclaimed fighting game! This new version includes all content (excluding Fighting Chance costumes, brand collaboration costumes, and Capcom Pro Tour downloadable content) from both the original release and Street Fighter V: Arcade Edition. Champion Edition adds each character, stage, and other content that released after Arcade Edition and will include all launch content coming to this new version. Fighters can battle their way through a variety of exciting single-player and multiplayer modes designed for players of all skill levels, including Story Mode, Arcade Mode, Team Battle, Ranked Match, Casual Match, and more. If you haven’t yet hit the streets, this is the perfect time to join the fight. 40 characters, 34 stages, over 200 costumes—all action-packed into one knockout edition! READY? FIGHT!

The initial Street Fighter V purchase is still the only one that consumers need to make to ensure they always have the most up-to-date version of the title. All game mode additions and balance updates are free for owners of any Street Fighter V version. Additionally, all downloadable content characters remain earnable completely free of charge through completing various in-game challenges and receiving earned in-game currency, called Fight Money. For those who can’t wait, in-game content can be obtained instantly using real money. Certain additional content can only be acquired using Fight Money, which can be earned through normal gameplay.

In addition to all of that, we have a look at one of the new challengers coming to Street Fighter V: Champion Edition here. This one is Gill and he is a master of cryokinesis and pyrokinesis. He also looks a bit like Two Face with the basic looks of it all. Basically, he looks cool but has all of the same style of gameplay we should have expected here. Maybe it is just me and sticking with the classic version of it all for now. I guess we will know more soon and when it launches early next year.

Gill, a master of both pyrokinesis and cryokinesis, is able to control fire and ice with perfect elemental balance (hence his outward appearance). Typically plotting behind the scenes, he is now ready to reveal himself to the world, as he sets out to fulfill the prophecy that the Secret Society has coveted since ancient times.

What are you thinking about Street Fighter V: Champion Edition getting announced and listing off features that could have been updates? Do you think there will be more to justify the full edition launch or will it just be something that could have been DLC? What do you think about Gill here and will he flow a bit different in our hands than we see in the video here? Let us all know down in the comments and then feel free to discuss. When there is more to share for Street Fighter V: Champion Edition, we will share it all here. Be sure to keep checking back in for all of that and much more.