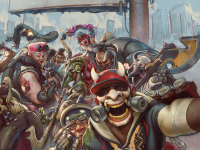 We now have a new release date for Bleeding Edge and when to expect to see it hit the PC and Xbox One. That date would now be March 24th of 2020 instead of what we were originally given a while back. That or maybe confused with in terms of a tech alpha that Ninja Theory was putting on at the time. No matter how you slice it, we can now look for Bleeding Edge to hit us all on March 24th of next year and with that comes a new video to look at. Just as we almost always get.

For those that may not be fully up on Bleeding Edge, this would be the upcoming 4v4 combat title that made a splash back at E3 but has kind of stayed silent for a bit. We will have 12 different characters to choose from that will house all kinds of melee and ranged attacks to bring down the opposing team. More or less, it is like many other team-based shooters out there with a few different classes to try to make Bleeding Edge stand out. It looks like it could be a whole lot of fun out there and now we know when we will be able to see it hit our systems. Happy days.

Team Up. Cause Chaos.

Coming March 24 2020. Pre-install with Xbox Game Pass to get access to our Closed Beta and receive the bonus Punk Pack!

Have you been keeping up with Bleeding Edge so far or is the first you are hearing of it all? Do you think that we will see a lot more gameplay or tech tests before then or is this the crunch time for the team? Do you think it will be another 4v4 team-based shooter that will be lost in the mix or will it stand out in some other way? Let us all know what you are thinking down in the comments and then feel free to discuss. For more on Bleeding Edge, be sure to keep coming back here. We will keep bringing you all that we can as it is available.