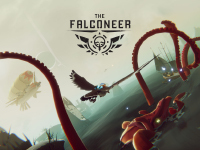 It is time to dive into some smaller news with an independent title getting some luck out there, as it looks like The Falconeer will now be heading over to the Xbox One when it launches next year instead of only be a PC title. No, it does not look like the developer was picked up by Microsoft here, but instead it looks like Wired Productions has opted to make sure that more games out there have a chance to experience what we will have here. I mean, good news for those out there that are only console gamers and though that The Falconeer looked like the must-own title of the year in 2020. That is not a slam on the game, but just the way that all was phrased before we move along.

For those that were left out of the loop on The Falconeer up until now, the game is not about training falcon to fly around and all that as the name might suggest. Instead, it is an open-world action RPG where we will get play as said falcon in some fun "dogfight" aerial combat. All while surviving the lush open environments and wildlife that will be roaming it. You know, it may just be easier for you to see what is going on in The Falconeer by looking at the following video instead. Have a look and see what it will all be involved with and know it will be heading to the Xbox One as well as the PC in 2020.

Award-winning publisher Wired Productions proudly announces it is bringing the open-world action RPG The Falconeer to console gamers for the first time, on Xbox One. Created by independent developer Tomas Sala, The Falconeer combines classic aerial dogfighting mechanics and acrobatic twists and turns, with an awe-inspiring open environment and bestiary of fantastic enemies in land, sea, and air. The Falconeer will have its world debut at the upcoming X019 in London on November 14-16, 2019, and will land on Xbox One and PC in 2020.

Set above The Great Ursee, a mystical world drowning in the corruption of the swollen oceans, players will take their armed aerial mounts in third-person to the skies as a “Falconeer,” an airborne and agile warrior equipped with devastating ranged weaponry. Your mission as a Falconeer will be what you make it – be it the noble cause or the life of a rogue - each player experience will be unique as they explore the bleak and hauntingly beautiful world, filled with wonderous locations and warmongering rival factions vying for the mysterious secrets hidden at the Ursee's unfathomable depths.

What are your thoughts on The Falconeer making its way to the consoles and is it always a good thing to see smaller titles hit a broader audience? DO you think that this will delay the game at all or will it just press on to launch all at the same time? Do you secretly hope this is still a game about training falcons and nothing more? Let us all know what is on your mind down in the comments and then feel free to discuss away. If there is more to share for The Falconeer moving forward, we will share it all here. Be sure to keep checking back in for all of that and much more.