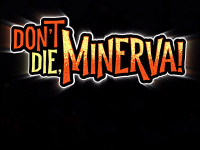 A new roguelike is on its way with Don’t Die, Minerva! entering its Early Access this coming December

Attention all of you roguelike fans out there, as Don’t Die, Minerva! is on its way to Early Access this December to keep the horrors of Halloween rolling into the X-mas month. Not like it is an attack on the holidays, although it would win brownie points from me if Xaviant was aiming to do that with their new game. No, it is just a way to get Don’t Die, Minerva! out there in our hands and with some of us able to play and help shape how the game will progress. It just also happens to be a horror/Halloween themed look to it all. Sometimes things just work out that way…

In any instance, what we have here is the announcement for Don’t Die, Minerva! where we will play as the titular Minerva whom has stumbled upon a mansion filled with evil spirits. Thankfully, she has a nice, little, magic flashlight that can be used to fend off from all of this. All as she progresses further into the procedurally generated levels of Don’t Die, Minerva! to take on the various bosses and the like. All in the usual manner for these kinds of games. Have a look at the announcement for the game and see if it will be something that piques your interest.

The forces of evil don’t stand a chance against 11-year-old Minerva, as she explores a haunted house, armed with an upgradeable flashlight and a backpack full of stuffed animals! Collect gear to survive and find shards to buy permanent perks, but be careful, die and you'll lose it all!

Do you have any thoughts on Don’t Die, Minerva! as it all stands or will you be waiting to see how the Early Access plays out first? Do you like a little horror in your X-mas or do you want all of the horror in your X-mas? Does any of this matter and you just want to play a solid rouge-lite and do not care about the rest? Let us all know down in the comments and then feel free to discuss. If there is more to share for Don’t Die, Minerva!, we will share it here. Just be sure to keep coming back for all of that and more.