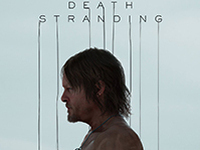 Some of us out there cannot wait for Death Stranding to launch tomorrow (11/8) on the PS4 and that is why we are here right now. There are only mere hours until the game drops out there as of this writing and the hype for Kojima Productions first solo title is still so high that we now have the opening minutes to the game out there to further that along or turn people off to the game. My guess is that it is going to be the former as there has been a lot of hype for Death Stranding and I do not see that halting anytime soon. Even if some of the early reviews out there are showing that it is all divided still. At the very least, we know we are going to be getting a completed video game at launch and not something rushed because gamers were over-hyped for it all.

If you are one of those gamers out there that can not sit still for Death Stranding, then you will be happy to see we have the first 37-minutes to take in. Something that will obviously spoil some of the story of the game but still show off what we will get to see before the title card drops on us. You know, the typical we have come to expect from the designer and his team to date. I have not watched every second of it, mind you, but it is here in its 4K glory to spoil part of the game before the next few hours tick down. Have a look at what we have for Death Stranding now if you so wish to do so for yourself.

Check out the opening moments of Death Stranding, the first independent game from Kojima Productions.

Play as Sam Porter Bridges as he attempts to reconnect a shattered America after the apocalyptic event known only as the Death Stranding.

Did you watch and enjoy the opening minutes for Death Stranding or did you fight the urge to be able to go in blindly? Do you still need to see more of the game to be able to make a final judgment or did this push you toward keeping/getting a pre-order in or did you cancel due to this? Do all of these words fall on blind eyes as you skipped most of it so you can fully enjoy it all? Let us all know what you are thinking here and then feel free to discuss. For more on Death Stranding as we have it to offer, be sure to keep checking in here. We will keep it all coming at you as best as we can.