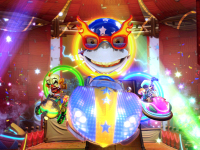 The next update for Crash Team Racing: Nitro-Fueled is almost here and it will be bringing us into a new kind of circus to enjoy. In fact, it looks like Beenox is dropping us into the Neon Circus with the next Grand Prix update coming to the game. Fans of the Crash Team Racing franchise just need to be excited and ready to dive into the new update on November 8th when it kicks off on the PS4, Xbox One, and Switch. That and get ready to blast on through it all while it is going on here. More racing and all kinds of new things to be unlocked and enjoyed along the way. Just as all good DLC and such should be enjoyed.

This new update for Crash Team Racing: Nitro-Fueled will be bringing some new items to the Pit Stop. The big ones being some new characters and skins, karts, and animations, and all the extra jazz that this normally entails. There is a new Ring Rally gameplay mode added in here too for Crash Team Racing fans along with a new track to be sped through. You can see more of it in action just below or get ready to have the fun with it all when it finally drops on us at the end of the week. The choice is yours to enjoy how you want to.

Hello and welcome to the Neon Circus, the next Grand Prix headed to Crash Team Racing: Nitro-Fueled this week!

Starting on Nov. 8, players that take on this electrifying Grand Prix season will be able to race around the bombastic new track, Koala Carnival as they complete challenges to earn Nitro. With this free Grand Prix, more characters from the Crash universe are slated to enter the race and exciting items fill the Nitro Gauge reward set. But that’s not all, there’s a new game mode that will test your mettle, and a special (ahem) chicken makes his royal appearance!

Are you still all-in for more for Crash Team Racing here or will this new bit bring you back in? Do you think the new track and mode will be a whole lot of new fun or will it be a re-skinned version of the classics we have already? What do you think of the new kart sets that we have here too? Let us all know what you are thinking down in the comments and then feel free to discuss. If there is more to share for Crash Team Racing: Nitro-Fueled, we will share it all here. Be sure to keep checking in for all of that and much more as we head forward with it all.