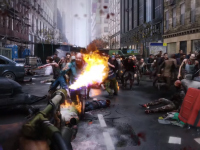 The world of World War Z is further expanding and evolving in terms of the video game side of things. That is, we are back with the next season of content in the works that Saber Interactive is working on to keep us all engaged and fighting more of the undead. Here we go with the second season of DLC for World War Z as we gear up to "Kill It With Fire" as the title so proclaims. Something that also shows off that we will be getting a new flamethrower weapon in the game with this update for those that want to go scorched Earth on everything. It is one way to make sure nothing comes back in the world where the dead rise. At least, one would think so here…

Obviously, there is more to this update for World War Z as it expands out the New York and Moscow portions of the game with new chapters to the story. Some that take place days after the events of the previous ones if you are keeping up with it all still. Not too bad of a deal given how it has all been on the free side of DLC when it comes to World War Z. With a whole lot more still to come. Have a look and see what will be expanding into your game here and if it will be worth the time to dive headfirst back into the undead again. It is Halloween after all, so maybe just for one day it will be worth it.

Kicking off World War Z’s second season of free content, the “Kill It With Fire” update features two challenging new PvE missions: “Dead in the Water,” in which your survivors must execute a new escape plan after being stranded on New York’s Hudson River, and “Resurrection,” which will take your team deep into the dark tunnels below Moscow. The patch also includes a new flamethrower weapon, Halloween trinket, and the ability to prestige rank for special rewards.

Is this the DLC for World War Z you have been waiting for or will you be asking for something different along the way? Do you think that we will get full and new locations in the future or will we stick to the few we have now with just longer stories? What other weapons do you think are missing from the game and we should see in the mix? Let us all know down in the comments and then feel free to discuss. If there is more to share for World War Z, we will have it all here for you. Be sure to keep checking back in for all of that and much more.