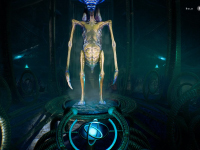 It feels about right that we would wait until Halloween to finally get some gameplay for Transient as that is what we have had to do now. It is also what we have here as Iceberg Interactive has released the first real look at the gameplay for the game for us all to take in and experience. For those not familiar with Transient, it has been touted to be a Cyberpunk meets Lovecraft style game that is all the rage as of late that is slated to release on the PS4, Xbox One, and PC in 2020. Your guess is as good as mine as to when it will officially launch, but it would be a great call to launch it around Halloween of next year if it was up to me. It is not, so we will see when it will finally come out.

Moving right along… What we have here is the first real gameplay for Transient that is out there and it shows off a bit of the walking as well as some of the puzzle-solving we will have to undertake in the game. It is all set in the future where mankind is hiding out in a final refuge after a hacker-for-hire stumbles upon the horrible truths of what is out there. My guess is that he will bring down the rest of the world in Transient to make sure he does not go mad along the way. We will have to wait and see for now. Either way, have a look at the gameplay we have here and see how the world has been built to give us that level of horror we may be craving on this day. I hope there will be much more to it all in the coming weeks and months.

In a distant, post-apocalyptic future, what remains of the population of mankind lives in an enclosed citadel called Domed City Providence, created to survive the harsh outside environment. In this, mankind’s final refuge, Randolph Carter, a member of a notorious hacker-for-hire group called ODIN, accidentally stumbles across the terrifying truth, a truth that might tear apart his own sanity and lead him to question his very existence.

What do you think about the gameplay for Transient that we have here today? Do you think it is holding up to the style and offerings that we have been told about or will it still need some time to set in? Do you think it will keep with the traditional Lovecraft themes or will it deviate out and make itself its own thing along the way? Let us all know what you are thinking down in the comments. When I have more to share for Transient, I will share it on the site for you. Be sure to keep checking in for all of that as we move closer toward when the game will actually launch.