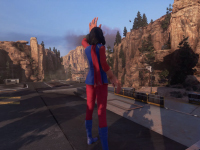 We have seen some of the combat and some of the story for Marvel’s Avengers, but now we are back with a better game overview on just what else we will be getting to play within the game. Sadly, we are not talking about new characters we are getting from Crystal Dynamics just yet, but some of the other systems we will have to work within the game. That and just about how we are going to be able to customize out different Avengers to make the game and experience unique for us, as well as stand out when we go online to play with our friends. If that is the way you are opting to play the game as it is something we will be able to do when it lands on May 15th for the PS4, Xbox One, and PC.

So, the new systems we get to see here for Marvel’s Avengers is the way we will select the two different types of missions in the game. We will have Hero Missions and Warzone Missions. The Hero ones being the main story campaign of the game while the Warzone ones will be the side missions that can be played solo or with up to four players. The basics of what we have been told for Marvel’s Avengers so far. All of which will share the XP and upgrades across the whole game as we progress and unlock the many different things in the game as we hammer through. Something I am sure no one doubted would be the case.

Speaking of upgrading, we have a little look at how this will flow in Marvel’s Avengers, as well as the way we will customize each character beyond the special skins from Marvel's 80-year history. Through XP, we will unlock new skills and moves for our characters along the way. To further customize to our likes, it looks like there will be a gear system on top of the basic skins that will allow us to tweak each of the Avengers just a bit more. Nothing too surprising based on what we have been told thus far for the game, but we get to see it in action here now. There is still a lot of time before launch, so things might change but here is what we have for now.

Marvel’s Avengers offers players a truly rich experience, with a combination of Hero Missions and Warzone Missions. Hero Missions are single-player only and are part of the overall Campaign. These Hero Missions are designed to showcase each hero’s unique abilities as you reassemble them to your growing roster. Warzone Missions can be played solo or with a group of up to four players as any Hero in your roster. Each mission dynamically scales based on the team size and player level.

Players in Marvel’s Avengers will also be able to customize Earth’s Mightiest Heroes in a number of ways. While each Super Hero will play true to their unique power sets, each will have the flexibility to play different based on the gear you equip and the skills you enable. Each hero has dynamic combo systems, Heroic moves, an intrinsic ability, and signature move sets to unlock and customize. You’ll also be able to customize these iconic Super Heroes with classic, fan-favorite, and all-new original outfits inspired by over 80-years of Marvel history.

To ensure a heroic experience for all players, Marvel’s Avengers narrative will progress over multiple years with every new post-release Super Hero and region delivered to players at no additional cost if you own the core game.

Does all of this flow for what you figured it would be for Marvel’s Avengers or did you expect everything to be one style of mission in the game? Do you think we will only have three slots for customization of gear or will we have a full assortment to play with on each body part? How do you think this will work for other characters that do not have specific gear to upgrade in the future updates for the game? Let us know what you are thinking down in the comments and then feel free to discuss away. When we get more to share with you for Marvel’s Avengers, we will share it here. Be sure to keep coming back for all of that and more.