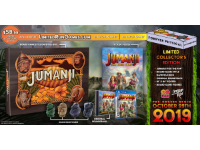 A new Collector’s Edition for Jumanji: The Video Game is on its way to give us more of the feeling of Jumanji besides the digital form

All you collectors out there need to look out as we have one more to add to the list for Jumanji: The Video Game here and it looks to include a few things from the franchise's past. Something that is a bit interesting to see as it does look like Funsolve is sticking more to the newer content when it comes to the films, but we will have to take everything that we are going to be offered, right? Of course we will and Outright Games is aiming to bring us all the Jumanji fun with this edition on November 8th for those of us willing to shell out just a bit more for this version of the game. That and you live in the U.S. and are looking to get the game on the PS4, Xbox One, or Switch. There is currently no listing for the PC version of the game in this form.

If this looks like the way you want to play with your Jumanji: The Video Game, then so know that this one will bring you your choice of platform of the game in a board game version box of it all. It will also house the soundtrack for the game, a nice little poster for the game, and some board game replica pieces that we all wished we could have back when the original film came out. Well, at least some of us that were not scared of getting sucked into the world of Jumanji way back then. It was a weird time back then and now we can add them to our collection shelves if we so choose to drop the $59.99 USD on this version of the game. It is only a little bit more than the basic version of the game. Outright Games has partnered with Limited Run Games to reveal their upcoming collector’s edition for Jumanji: The Video Game available to order now for release alongside the game’s official launch date on November 8th.

This limited run edition contains the full game, its original orchestral soundtrack, an exclusive character art poster and detailed replicas of the original Jumanji board game pieces. All of this comes packaged in an authentic board game style gatefold box for the most dedicated adventurers to add to their collection!

Brought to you by leading worldwide family entertainment publisher Outright Games, Jumanji: The Video Game is a brand new 3D action-adventure game that sees players take on the role of Jumanji’s greatest heroes as they fight their way through waves of deadly marauders and dangerous, exotic creatures in online, or split-screen modes.

This collector’s edition will only be available in the United States for a price of $59.99

Are you excited to get any of this stuff for Jumanji or will you just be looking for the basic form of the game here? Do you like the addition of the game pieces or do you have them already via other various ways? Do you think that they should have focused more on the video game version the franchise is going with or does this all make sense here? Let us all know down in the comments and then feel free to discuss. If there is more to share for Jumanji: The Video Game, we will share it all here. Just be sure to keep checking back in for all of that and much more as we get closer to launch.