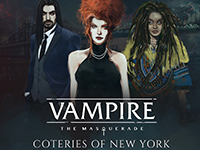 There have been so many updates for so many games in the Vampire: The Masquerade line as of late and we have yet another one for a title that is launching on the PC on December 4th of this year. It will also be coming to the Switch early in 2020 and by now you might know that we are talking about the other narrative title coming from Draw Distance in this line. You might remember when we heard about Vampire: The Masquerade — Coteries Of New York a while back. If not, welcome to your first introduction. If you do, get ready as we have some gameplay to look at to get us all excited for this new experience in the franchise that will make it into cannon for the tabletop version of the game too. All of which is extremely interesting to take in.

What is interesting to see here for Vampire: The Masquerade — Coteries Of New York is that unlike the other narrative titles or games that will be in the 5th Edition of the tabletop game, this one plays more like a regular tabletop game without a Storyteller. Well, at least in the usual form as the game will be walking us through a story in the same way but in a digital way. It would not be a video game if that was not the case. We just get to choose our own adventure here in the World Of Darkness here and shape our Vampire: The Masquerade though the various clans we can start as and lay through the mysteries involved. I only wish that we would stop going with the unsanctioned embrace storyline that seems to be all the rage for all of these games out there. Have a look at just how this game is going to play out for us all just below.

Vampire: The Masquerade — Coteries Of New York presents the conflict between two vampiric factions: the traditionalist Camarilla and the fiercely independent Anarchs among the iconic landmarks and night lights of The Big Apple. It’s a unique, atmospheric, single-player narrative experience, set in a rich, fully licensed, globally recognized universe of Vampire: The Masquerade 5th Edition.

The game does justice to the mature themes of the World Of Darkness, and takes advantage of the excellent atmosphere of the source material. It also creates new stories, which, thanks to the full creative license, will be incorporated as official lore of Vampire: The Masquerade 5th Edition.

Do you agree that it looks like it will flow like a normal game of Vampire: The Masquerade in tabletop form or could this just be the setup for now? Do you think we are going to have access to all clans out there or will we be stuck with a few to make the design a bit easier? How do you think the branching narrative will feed into the official lore for the game or will it only be one of the branches? Let us know what you are thinking down in the comments and then feel free to discuss. If there is more to share for Vampire: The Masquerade — Coteries Of New York before launch, you know we will do it. Just be sure to keep checking back in for all of that and much more.