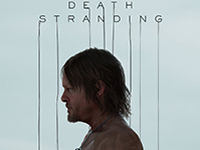 There is just over a week before we get to dive in and see just what Death Stranding is all about on the PS4. November 8th is a week from Friday and when the game is still slated to release. Do not fret that this was yet another delay announcement. In fact, it looks like Kojima Productions is looking to bring the game out to more gamers out there. As the headline states here, Death Stranding will be coming to PCs around the world next year. Specifically Summer of 2020 as 505 Games is ready to publish it on the platform yet to be determined for PC gamers to download from. We still have to wait for all of that information to flow out.

It is interesting that it took this long to get the announcement for Death Stranding, but I know it is something many gamers out there will be excited for. It is also interesting to see if it will ever release on the Xbox One or Switch at some point. More so as it looks like the PlayStation exclusive thing may not be something set in stone now. It is interesting given how Death Stranding has been described thus far and how many more will need to be connected. I guess we will see here in the near future and then beyond.

Thanks to all of you who have been supporting #DEATHSTRANDING!
DEATH STRANDING release on PS4 is November 8, 2019!!
Furthermore, KOJIMA PRODUCTIONS is happy to announce that DEATH STRANDING will be coming to PC in early summer of 2020!!#kojimaproductions #deathstrandingpc pic.twitter.com/Sk4clWWY1X Are you surprised to find out that Death Stranding will now be coming to the PC or did you think it was going to be just a matter of time? Do you think this is all based on some timed-exclusive deal or something that had to be specially set up? Do you think the game will eventually hit other platforms out there or will it just be PC and PS4 now? Let us all know down in the comments what you are thinking and then feel free to discuss. When there is more for Death Stranding, we will have it here for you. Be sure to keep checking in here for everything and much more.