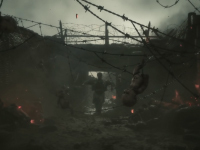 We are again at a point where we will need to take everything we can for Death Stranding as we only have a few more weeks before we find out what is going on in the game. Even with all of the press junkets and media out there from Kojima Productions, it is still not exactly clear what we have going on in the game besides the walking and deliver aspects. I am sure there is more to Death Stranding than just that, but that is all based on the past from the developer and how things were released before. Now we have just a bit more to take in to try to figure out what is going on in the game. Sadly, it is not much more but it is something new to look at and pine for.

Before you dive into the new trailer for Death Stranding, it is a Japanese trailer so you will need to speak and read the language to fully get what is going on here. For those who are left out, there are quite a few new bits of gameplay and other parts to just look at to get a feel for the game. Nothing that truly shines a light on what is going on in the game, but something to keep us going for now. Even if there does look to be a nice, new enemy mixed into the shadows here. Maybe it is something we have seen in the past Death Stranding trailers…maybe not… It is something new, so just be happy and enjoy.

Long-awaited worldwide. An unprecedented gaming experience created by PlayStation 4 by Hideo Kojima. With the occurrence of Death Stranding, people and cities were torn and divided. The humans who lost their connections were in danger of being destroyed. Sam Porter Bridges goes on a mission to carry the “future” for those who are isolated and unable to move. What is Death Stranding? What does Sam carry and what is connected? The development of the shock awaits the game experience that surpasses expectations. World-famous actors such as Norman Reedus who plays the main character Sam Bridges, Mats Mikkelsen, Rare Sedu, Lindsay Wagner appear.

Were you able to see all of the new things here for Death Stranding or was it just different takes on the same shots from before? Do you understand anything more for the game based on this or will it just take the full launch before anyone fully understands what is going on? Could we all be getting trolled here and this is another experiment by Kojima to see how far we will go for him? Let us all know down in the comments and then feel free to discuss. If there is something more or new for Death Stranding, we will add it to the site for you. All you need to do is keep checking back in for all of that and much more.