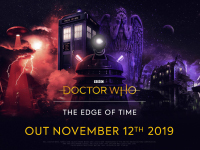 The final release date for Doctor Who: The Edge Of Time is now set down for all Doctor Who fans to prepare for

There is not much more to say here other than we now have a solid release date for Doctor Who: The Edge Of Time to hit the various VR setups here. It pretty much missed the original slate of September, but it looks like Maze Theory is solid behind the launch as it will now be hitting everything on November 12th of this year. Be it in the Oculus, HTC, or PSVR forms, all the Doctor Who fans out there will have their chance to join in the fun on the same day. I mean, provided that they have the hardware to do just that. There is still that factor for others to worry about, but you still have some time for that to be finalized.

Again, there is not much else to share about this that has not been gone over for Doctor Who: The Edge Of Time already. It still will have us grabbing the Sonic Screwdriver and joining in the odd fun of it all with links to the current run of the show. At least in terms of Jodie Whittaker being the voice of the Doctor here and a few other things to go along. Given what I have experienced for it so far, it will be something that all Doctor Who fans will want to give a try at the very least. Maybe the delay in it all will have added in more for the VR enthusiasts and gamers too as it was a bit lax on that the last time I played…

Grab your sonic screwdriver and embark on an epic journey to save the universe. Doctor Who: The Edge of Time comes to PSVR this November. pic.twitter.com/CYaed5Vedc

Have you been waiting for Doctor Who: The Edge Of Time to finally come or will it be dropping at the right time for you? Why do you think it has been pushed out as it has been or was all of this just a lack of communication between everyone? Do you think this will have more to offer than just fan service or could it break some new VR grounds? Let us all know down in the comments and then feel free to discuss. If there is more to share for Doctor Who: The Edge Of Time, it will be on the site for you. Be sure to keep checking back in for all of that as it flows out there.