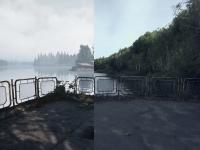 The gates to Chernobylite are about to open with the Early Access for the PC version of the game kicking off on October 16th. Yes, that is quickly rolling up on us and The Farm 51 still needs us to not only pick up the game beforehand but also dive in and help them make sure it was we are looking for when it finally hits all of the other platforms it has been planned for. That and also get some of us already for the deeper dive into the world of Chernobylite and the real-world location it is all based on. The team did go out there and make sure to copy it into the digital space as well as they could to make sure have a solid depiction of it all.

That said, we have a new video for Chernobylite now to show off just how close the team paid attention and recreated everything that they could. You can see that new video just below, but as a word to the wise, it can be hard to spot the differences between the game world and the real-world here. In some instances. In others, it is a bit easier, but those look to be the ones that were designed just for the game setting. Either way, Chernobylite looks to be an impressive bit of work here to recapture all that could have been lost to us all. It still kind of is but we can take a virtual tour of it while playing through the horrors that are within the game side of it all.

After a few years of working on an extremely accurate re-creation of the Chernobyl Exclusion Zone, we've prepared the video comparing the real locations with their virtual counterparts. You’ll see there how precisely Pripyat’s and Chernobyl’s signature places have been digitized into the game objects with help of photogrammetry and other advanced 3D-scanning techniques implemented within our Reality 51 technology.

How are you feeling about Chernobylite and how it all looks now that you have seen some side-by-side? Do you think that it will hold up all the way through or are these some of the better shots the team has to get us all hyped up? Do you even care and just want it to be the 16th already so you can just enjoy what is going to be offered in the Early Access? Let us all know down in the comments and then feel free to discuss. For more on Chernobylite, keep your eyes glued to the screen here. We will keep bringing all that we are given up to and beyond the full launch of the game.