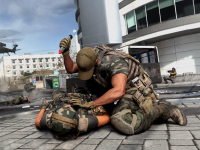 A new look at the Special Ops mode for Call Of Duty: Modern Warfare gives us a bit more on just how this Call Of Duty mode will be improved upon here

The Special Ops mode is making its way back in with Call Of Duty: Modern Warfare, and we have a nice little taste of what that will all bring with it when the game launches on October 25th. Well, at least some of it as there will be parts exclusive to the PS4 version of the game that will leave the Xbox One and PC gamers in the lurch. That is not why we are here though, as we are here to take a look at just what Infinity Ward is cramming back in this Call Of Duty title for us. More so in the Co-Op manner as this mode has been known for in the past. A nice and intimate ordeal between four friends or strangers whom have been matched together from an AI out there.

In this Special Ops mode for Call Of Duty, we will see the return of Operations, Missions, and the timed-exclusive Survival Mode in the game. Operations being the four-player co-op where larger, multi-stage experiences will take place over many different maps. All involved will need to progress through to complete the full operation and all of its stages. Then we have the missions, which are more or less straightforward, where you can play solo or with up to four players again. Lastly, we have the Survival Mode that will only be on the PS4 version of Call Of Duty: Modern Warfare until October 1st of 2020. This is the wave-based horde mode that many have loved in the past. Maybe not exactly the same, but same style where you and three friends will fend off against waves of increasingly hard foes.

Special Ops, one of Call Of Duty's most-beloved game modes, is available on all platforms when Modern Warfare launches on October 25. Reimagined as a collection of expansive, interconnected Operations against a new and encroaching threat, players will assemble into strike-teams of four to execute multi-phased objectives, which together will advance the overarching story of Modern Warfare.

What are your thoughts on Special Ops here for this Call Of Duty entry? Do you think it will be something that will keep us all playing longer after the core campaign or will it be left out for the larger multiplayer in general? Is it weird that only one aspect of it will be a timed-exclusive or will that truly pull in the sales the publishers are looking for? Let us all know down in the comments and then feel free to discuss. When we have more for Call Of Duty: Modern Warfare, it will be up on the site for you. All you need to do is keep checking back in for all of those updates and much, much more. Only a few weeks now until that all drops on us.