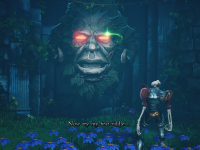 We are getting ever closer to the release of MediEvil on the PS4, which means it is time for even more gameplay to take in. Not only that, but in the traditional manner of gameplay we should expect in terms of how this remake has been updated and altered from Other Ocean to give us what was originally intended. It is always fun when technology advances and we are looking to relive our past through it all again. Not completely the case here for MediEvil, but it does give us a new and long bit of gameplay to enjoy in the mix that compares everything to the original 1998 version of the game. Get ready for some harsh transitions.

For those interested before watching the gameplay, what we have here for MediEvil is a nice run through most of the Asylum Grounds level in the game. It is a bit of the way into the game already but does not spoil too much of the story for those that have not experienced the game before. We also get to see how not only did they update the visuals and basic layouts of the level, but have added in some interesting other features to bring things in line with the modern style of design. Things like having little cut scenes to indicate you did something correctly and are not just running around in circles in MediEvil trying to figure out puzzles. Things that were rampant in the 90s but would force gamers to toss the controller aside now.

Let's Play MediEvil! PlayStation producer Nick Accordino joins us for a romp through the mysterious Asylum Grounds in the MediEvil remake. We compare the updated visuals to the 1998 PlayStation classic to shocking results! MediEvil hits PS4 October 25.

Were your eyes ready for the harsh transitions between the old MediEvil and the new one? Did it really feel like a toy box version of a game back then or are some of us not remembering how this game all went down back then? Do you think that it will be helpful to add in some of the "instant gratification" elements here or should they have stayed as true as possible to the original? Let us all know down in the comments and then feel free to discuss everything. As we find more to share for MediEvil, it will be on the site. Obviously. Keep checking back for all of those updates and many, many more yet to come.