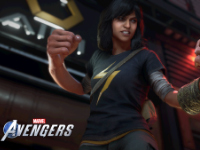 The roster for Marvel’s Avengers is getting even bigger as we have one more main character added in for the score story we will all get to experience. Yes, there were words selected there for fun… During NYCC, though, Crystal Dynamics has let loose that not only did we all spot the Kamala Khan Easter Egg in the first trailers but that we are also getting her in the mix. Not only in the mix, but this version of Ms. Marvel will be more of a lead character here for Marvel’s Avengers as she will be integral to the core story. I am trying to think of a way to make this announcement bigger for us all… I cannot so we will just know she will be one of the core characters when the game hits the PS4, Xbox One, and PC this coming May 15th.

This is an interesting choice here for Marvel’s Avengers, but one that I know a lot of fans have been hoping for given the character's popularity in the recent dates. It is also nice to see that someone that is not a core Avenger will be here and not as a future DLC character. More so when you see that her powers and fighting style is truly and vastly different than we have seen before in Marvel’s Avengers. Given that she has the ability to enlarge and expand her skin and limbs to do all kinds of various things. On top of having one of the more captivating stories in the books currently too. Such a solid and unexpected choice for us all to enjoy. Especially when it looks like the game will look at her creation story and on through the other major events in this game. Have a look at her in action right now.

The Avengers’ absence following A-Day had devastating consequences worldwide, including a new, enigmatic organization coming to power — Advanced Idea Mechanics, also known as AIM. With the Avengers disbanded and AIM turning public sentiment against Super Heroes, Kamala hides her budding abilities from the world. After uncovering a shocking conspiracy, Kamala must learn to embrace her powers in order to reassemble Earth’s Mightiest Heroes. Were you expecting Ms. Marvel to be a character in Marvel’s Avengers or did you think that was all speculation from way before? Do you like the fact that we are going to be getting some of the newer and different characters in the core game here or did you only want the classic team to play as to start? Do you think this will open the floodgates for other Inhuman characters to show up in the core game or will the rest be held for future DLC? Let us all know down in the comments and then feel free to discuss. For more on Marvel’s Avengers, just keep coming back here. We will keep dropping all of the news and updates for you as soon as we have them. I hope we have more core characters out there real soon.