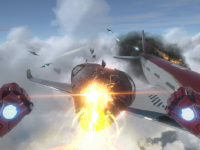 We finally have a date to look forward to for Marvel’s Iron Man VR to hit the PS4 and PSVR setups and that date is now February 28th of 2020. Not too far off and given how much we have seen from Camouflaj for the game to date, it looks and feels just about right. The released date not just how Marvel’s Iron Man VR currently looks. That is still on the impressive side of it all and has felt just right for a bit of time now. I can only imagine having been made that much better given the time they have taken until now. It has been a nice little jump from SDCC to NYCC and all.

With all of that said, we also have a nice little insight into more of the story we will experience in Marvel’s Iron Man VR and just who we will be taking on in the full game outside of just flying drones. It looks like Ghost will be making a showing here using the same look and feel from the Ant-Man film, but obviously back to the old habits again. Well, more likely that they are just the same as before as this Iron Man story is not supposed to be linked into anything other than the basic stuff we know from the comics. These franchises are weird when trying to branch out at this point. Either way, we have a whole lot more to look at as we wait for February to roll upon us all now.

Tony Stark has retired from making weapons and instead creates technology used to battle evil as Iron Man. After several years as a world-famous Super Hero, Tony is attacked by the mysterious Ghost, a hacker and anti-corporate activist who repurposes old Stark Industries weapons. In her efforts to topple his empire, Ghost attacks Stark’s corporate locations around the world, leading to ever-escalating stakes and a final showdown. Is this about when you were expecting to be able to play Marvel’s Iron Man VR or did you think it was going to be a bit further out than this? Do you find it off that they are using a lot of the visuals form the films more to define the character looks here or is it just a fun style to link fans back in? How do you think the fights with Ghost will go down or will they be swapped up in various ways throughout the whole game? Let us know what your thoughts and opinions are down in the comments and then feel free to discuss. When we have more to share for Marvel’s Iron Man VR, it will be all shared here on the site. Just be sure to keep coming back here for it all.