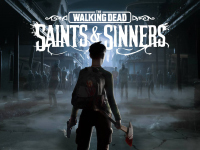 Here we go with another title in the huge franchise with The Walking Dead: Saints & Sinners coming to our VR devices on January 23rd of 2020. For the specific platforms, we do not have that word yet from Skydance Interactive, but I think it will be easy to assume it will be all the big players when it comes to the PC platforms for VR. Of course, that means that we need to have something at least decent when it comes to an experience and a game as a lot of the past titles for The Walking Dead have not been able to live up to the one massive one. Maybe diving fully into VR, again, will help and we will have a compelling story as well as some solid gameplay that will not just rely on shooting and killing zombies and humans alike.

As it goes for The Walking Dead: Saints & Sinners, it looks like it will all take place in New Orleans after the fall has happened and we will need to take up the role to survive and help lead a different community out there. It also sounds like this will not be an on-rails kind of game in the VR setting as we will be able to scale buildings and roam around while using our weapons in the physics-based system here to take everyone and thing down. Mix in some of the other things, like disease and famine, we will need to deal with that only get glossed over in The Walking Dead in general, this could be a fun new entry. I will not hold my breath for it all just yet, but the cinematic trailer and few screenshots we have here do lend to it looking like it could be a load of fun.

We’re very proud to partner with Skydance Interactive, a division of Skydance Media, to unveil the first official trailer for The Walking Dead: Saints & Sinners, giving players a first look into the unforgiving wasteland they’ll face in the upcoming virtual reality title, slated to launch pending. This first official gameplay trailer showcases the gruesome adventure players will embark on as they journey through the flooded remains of New Orleans. Players must make gut-wrenching choices and find out who they are in their fight for survival against not just walkers, but the constant threats of violence, disease, and famine.

In The Walking Dead: Saints & Sinners, freedom of choice and visceral combat offer players a new way to live survival horror in a deep-rooted VR gaming experience. Scale buildings to ambush enemies from above, hold down a walker’s head to rip a knife out of its skull or attack from a distance with throwing weapons, bows and long-range firearms. Players can choose from an arsenal of weapons or craft their own to fit their play style and survive their way. Physics-based combat makes every swing of an axe or jab of a knife resonate with impact.

Choices in The Walking Dead: Saints & Sinners will affect not just how the combat plays out but the fate of the city and its other survivors. New Orleans is at war and the living are not just fending off the dead, but each other as well. Will players risk life and limb to protect those in need or eliminate anyone who stands in their way? Will they join one of the warring factions, or play them against each other for personal gain?

As players dive deeper into this unforgiving journey they will uncover the mystery at the heart of the conflict that threatens to tear the city apart. Filled with discovery, The Walking Dead: Saints & Sinners will have plenty for players to explore, craft, fight and uncover when it launches in early next year.

How do you feel about this The Walking Dead title here based on what we know and have to see here? Do you think it will be another title that will be lost in the mix or could it live up to the other rare instances for the franchise? Do you think that VR is the proper setting for all of this or will it need to be a different platform to get us all the proper experience? Let us know what you are thinking down in the comments and then feel free to discuss. As we learn more for The Walking Dead: Saints & Sinners, we will update everyone here. Just be sure to keep coming back here to check it all out and everything. I hope we are not let down at all.