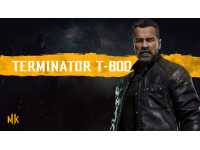 We are almost to the time where the T-800 joins the roster of fighters for Mortal Kombat 11 and that means that we have some new gameplay to look at to see just how he will be added into the mix. It is not something new as NetherRealm Studios has laid it out that we will be getting the character on October 8th. Not a huge secret at all, but we do get to see him in action a bit more for Mortal Kombat 11 as well as some of the new character skins coming along too. One of which is kind of a tie-in to the new Joker film and the upcoming Birds Of Prey film. That would be Cassie Quinn, which is just about what you should expect here.

In terms of the new T-800 here, it looks like he is going to play and handle quite a bit like Jason did in the previous Mortal Kombat title. He will be a bit of a slower character that hits hard and is relentless. Even to the point where he will be able to rise back up after being taken down in the match. It is a bit unclear if it will only happen is he is brought down by a fire attack, but it is how it looks here. If only they would have been able to get a better voice actor to do the voice of Schwarzenegger here in Mortal Kombat 11 as that is so jarring to hear for me. You can have a look and see just what I am talking about below, as well as how it will break the timelines further in the game than the story did.

Warner Bros. Interactive Entertainment and NetherRealm Studios today released a new gameplay trailer for Mortal Kombat 11, the No. 1 selling console game in the U.S. year-to-date, showcasing the Terminator T-800 from the upcoming Skydance and Paramount Pictures film, “Terminator: Dark Fate.” Featuring the likeness of actor Arnold Schwarzenegger, the Terminator T-800 is the ultimate cyborg assassin, sent back in time from a post-apocalyptic future. Nearly indestructible with superior technology, fighting skills, and artificial intelligence capabilities, the Terminator T-800 is the next playable fighter set to join Mortal Kombat 11, available Oct. 8 as part of the early access period for Kombat Pack owners. How are you feeling about the T-800 in Mortal Kombat 11 as we see here and will he be a solid new character for us all to enjoy? Do you agree that he looks to play like Jason from before or will he be vastly different once we get our hands on it all? Do you think we are going to get more of these kinds of skins as the films keep flowing out or will this be it? Let us all know down in the comments and then feel free to discuss. For more on Mortal Kombat 11 and all of the coming DLC for it, be sure to keep checking back in. We will keep letting you know everything as soon as we know.