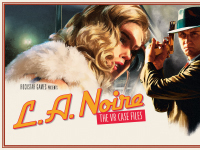 The fun of L.A. Noire continues as the L.A. Noire: The VR Case Files are now out for PSVR users to dive into

It has been a long wait, but those holding out for the L.A. Noire: The VR Case Files to finally come to the PSVR can head out and pick it up. Well, they could have already as Rockstar Games released it for the system late last week, but it is still good to have a nice reminder. It is also good to have another VR experience we can undertake on the PS4 after playing through L.A. Noire in general again. It was remastered for the console and all with some fun new bells and whistles. Nonetheless, you can now look to get the VR experience for it all right now if you so choose and want to throw down the cash.

To further entice us all to pick up L.A. Noire: The VR Case Files, there are three new minigames in the mix of it all as well as all of the case files we get to experience. There is some boxing, speed car racing, and a shooting gallery all mixed in for when the investigation and interrogation gameplay wears down on you. It can and might happen. You never know. I mean, it did for me in the core run of L.A. Noire and I would have liked to have a few other distractions in the mix. I guess I just needed to hold out until now to truly be able to get all of that.

Step into the painstakingly recreated world of 1940’s Los Angeles through the eyes of Detective Cole Phelps as you solve cases from across all five desks of the original L.A. Noire, including: Upon Reflection, Armed and Dangerous, Buyer Beware, The Consul’s Car, The Silk Stocking Murder, Reefer Madness, and A Different Kind of War – each picked for their suitability to the virtual reality experience.

In addition to cases to solve, L.A. Noire: The VR Case Files for PlayStation VR allows Detective Cole Phelps to let off some steam with three fun new minigames designed to take full advantage of the game’s unique VR mechanics:

Have you already picked up L.A. Noire: The VR Case Files or were you holding out to play on your PSVR? Are these all the little extras you have been waiting for or do you think that it is going to be too little too late for the core fans out there? Will you be losing hours of your time in the boxing ring or shooting things or will that get bogged down too? Let us all know down in the comments and then feel free to discuss. For more on L.A. Noire in general or any of the other side bits for it, be sure to keep checking in here. We will keep bringing you everything that we can as time marches on.