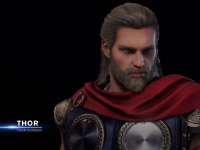 Here we go with the final character profile for Marvel’s Avengers here as Thor is now on the scene and ready to swing his hammer hard. It is a bit interesting to finally see him in motion given how much he can link into other things out there, but I will not scoff at it. It is still a bit more for what Crystal Dynamics is going for with the game here, and I will take it all. So will you, I am sure. Even if it is only the smallest of slices for Marvel’s Avengers for us all to have here. I am sure it will kick up well before we get into next year when it is supposed to finally hit us all like a hammer.

What I do find interesting here for Marvel’s Avengers is the fact that Thor does look like he is flowing quite a bit as we have seen other gods recently in the video game world. Fighting with fists, throwing a weapon for it to return, and then following it up with some kind of magic. You most likely know where I am going with this. That is not to say the gameplay will not work for Marvel’s Avengers, it is just an interesting design choice. I also hope that it flows just as smooth as we have seen already in the past. I guess we will find out and just how the other characters coming will have their own feel in terms of gameplay.

The God of Thunder, Thor flies in for his very own Hero Week! People of Midgard, behold his mighty strength, his glorious lightning strikes, and his unmatched ability to make the snidest of comments. pic.twitter.com/R53WLrWdqB

Just as we have had multiple times over for Marvel’s Avengers already, we also have a new look at the previous character shown off and a new skin. This one being Black Widow and her suit from her comic back in 2010. It, sadly, does not look like it is a huge deviation, but if that is the look you want for her, you will be happy. Take a look and see how she may look in your version of the game if you so choose to change up your Avengers in the game.

It was a no-brainer to include this iconic look, inspired by Black Widow #4 (2010), as an unlockable outfit in Marvel’s Avengers. Some outfits — like Widow’s classic catsuit — can be earned in-game, others will be purchasable in the marketplace.

How are you feeling about Thor here for Marvel’s Avengers and do you agree with my assumptions? Do you think this is a good sign given how the other game worked or will it be something different and just looks similar? How about the new costume we have here too and do you think there needs to be more variation in the future? Let us all know down in the comments and then feel free to discuss. When there is more for Marvel’s Avengers, we will add it all to the site for you. Be sure to keep coming back to look at it all and enjoy in the future.