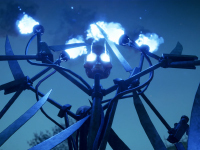 For those that have stuck with RAGE 2 instead of the other wasteland shooters that have dropped out there, you need to be ready for a few things to change in the world. That is, if you picked up any version of the game that Bethesda was offering that came with the Season Pass. That or you are looking to further expand your experience with more from Avalanche Studios as the latest expansion is nowhere for our amusement. The world of RAGE 2 is getting bigger on the PS4, Xbox One, and PC via this DLC and it is not out in the wild for us all to enjoy. It should not be a huge surprise given that we knew it was all coming, but this is just a nice reminder.

This new expansion adds in quite a few things for RAGE 2. A whole new faction that is bringing a whole new story to experience out there. A whole new region of the world to head out and explore too. Obviously this means we will have new weapons and new abilities in the mix as well. All of which has been explained before, but now we have a nice little trailer to look at to see just how it will all flow in RAGE 2. Have a look and get ready to download the nice little expansion. Even if you have not picked it up yet, you can still throw $15 USD at it and get it right now. Maybe this video will help sell you more on it.

Rise of The Ghosts expansion is out now!

The Ghosts may have just been a wasteland folktale, but not anymore. They’re real and so are their plans for domination. Armed with nanotrite abilities and led by the fearsome Iris, the Ghosts are dangerous enemies. Navigate the Overgrown City, a huge new region, and put a stop to their uprising.

Have you been waiting for this expansion to finally come or have you set RAGE 2 fully aside already? Will this have you taking a break from the other big titles that have just dropped or will it only be a short blip for now? Where do you think that the story is going to go for us all here and will it be bigger than we thought? Let us all know down in the comments and then feel free to discuss. When there is more for RAGE 2, we will have it all here. Be sure to keep checking back in for that and much more from all over the gaming spectrum.