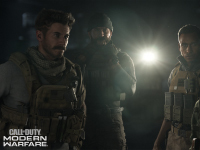 We have a look at the story coming for Call Of Duty: Modern Warfare as well as a look at just how deep and authentic this Call Of Duty will be again

The waiting is over and we have been patient enough, so here we go with a new story trailer for Call Of Duty: Modern Warfare to bring us all deeper into the franchise and fight. More so given how we did not have a campaign or any real story in last year's title. Now that Infinity Ward is coming back with a vengeance, it feels like they either need to come out strong or with something we have all been longing for. Given the latest trailer we have here for Call Of Duty, it looks like it will be the case and have a bit of social commentary mixed right in as well. Just as we have come to expect up until recently.

As it goes here for Call Of Duty: Modern Warfare, it looks like the enemy military has its hands on some chemical weapons and we are going to be part of the team to track them down and stop the use before it is too late. Kind of a normal affair when it comes to these games. The fun little difference here is that it looks like it will not be told only through the lens of the Western side of it all and mix in more of the local stuff too. Not everyone in the foreign nations are enemies when you play a game like Call Of Duty where the United States is always made to be the heroes. That is right. I said it. Have a look and see how things may be deviating just a bit but still giving a great story.

On October 25th, when the world is threatened, you’ll have to get your hands dirty so the world stays clean.

In a desperate mission, Captain Price and the SAS will partner alongside the CIA and the Urzikstani Liberation Force to retrieve stolen chemical weapons. The heart-racing fight will take you from London to the Middle East and other global locations, as this joint task force battles to stop full-scale global war.

Lines will be drawn, your resolve will be tested, and the world will look to you to do what needs to be done.

If that was not enough to fill your Call Of Duty void, we also have a nice little behind the scenes video to take in for the same story too. Not much else is revealed about the story of the game, but it is a nice little look at how Infinity Ward is trying to keep the realism and various aspects of the world in the game. Something that is not new or unique but still something that is nice to see happening. It really does add that little extra bit for a Call Of Duty game when you see and hear those aspects of it all. Have a look and see what the outside sources have to say about the crafting of it all.

Call Of Duty: Modern Warfare — Behind The Scenes Story Trailer

The rules have changed.

Take a peek behind the curtain and into the making of the Call Of Duty: Modern Warfare story.

Was this the Call Of Duty story you have been waiting for or will it be a paint-by-numbers affair to get us all back on board with a campaign? Could we look forward to playing as the various other militaries and fighters in the game or will they just be along for the ride as before? Do you even care and are just here for the multiplayer that you will inevitably just complain about in the longer run of it all? Let us all know down in the comments and then feel free to discuss away. When we have more to share for Call Of Duty: Modern Warfare, we will share it all here for you. All you need to do is keep breaching your way back into the site to see.