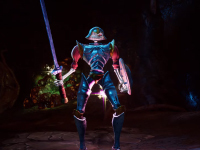 The State of Play video from yesterday brought all kinds of fun and news to us and it looks like we had much more for MediEvil mixed in yet again. Not the biggest of surprises out there as we are coming up quick on the October 25th release date for the game where Other Ocean will be placing the game on the PS4. I have a feeling that this will only be the tip of the iceberg here given that for MediEvil. Nonetheless, we have new gameplay here to take in. That is if you have not just jumped right into the demo that has been released at the same time as this new trailer too. Yes, there is a way to play it a bit now.

You can rush off to the PlayStation Store right now and download the "Short-Lived" MediEvil demo that is out there before it is pulled down. It is, obviously, a nice little slice of the full game coming, but it will house a nice little extra for those that do partake. All you have to do is play through the demo and all of the zombie, demon, and crawling hand killing that Sir Daniel will be doing. Once you do that, you will unlock a new helmet to carry over to the full version of MediEvil when and if you buy it. If anything, it is a nice little extra to have just for giving the game a try. I know I have it already downloaded and maybe you should too.

Experience the MediEvil Short-Lived demo – only for a limited time!

Let the PlayStation classic come back to life! Join Sir Daniel Fortesque in a slashing-good time through the opening stages of MediEvil for PS4. Marvel at the beautifully rebuilt Kingdom of Gallowmere in 4K as you embark on a quest of redemption that will take you through zombies, demons, necromancers, and …crawling hands? Featuring the tried and true gameplay of the original PS1 title with a number of graphical and technical enhancements, dead has never looked so alive! And keep your (single) eye out for Dan’s Helmet – acquiring it within the Short-Lived Demo will unlock it for use in the full game.

Are you glad to see that we are getting a nice little demo for MediEvil just before launch or will you be waiting for the full game instead? Will you be giving it all a chance just to see how it has been updated or will you just be going for the free in-game item? Will this still be a nostalgia-inducing title and nothing more as is some of our fears? Let us all know down in the comments and then feel free to discuss. When we have more for MediEvil, we will share it all with you. Just be sure to keep checking back in for all of that and much, much more.