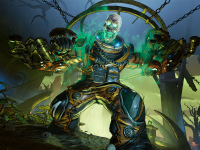 It did not take too long before we have word on the first big event to go down in Borderlands 3 and that is the upcoming Bloody Harvest. Just as we always see during October, Gearbox is giving us a nice little Halloween themed event on the various planets around the galaxy in the game here. At least for those that have been able to venture of Pandora in Borderlands 3 before the event and willing to go into some spooky places out there in space. Not like the crazy levels of horror from other video games that go down that path, but in a fun little way to let us know things are different. Hey, it is a free thing coming to the PS4, Xbox One, and PC versions of the game out there so we cannot knock it all that much. Just accept it.

During this event, we will see "spirits" rising out of some of our downed enemies in Borderlands 3. This will indicate that there is something otherworldly going on and we need to strike again. They can strike back with a new Terror mechanic in the game that will cause a few different debuffs. Once we join in the fun and completed enough of the various events, we will be able to hop along to a different area where the real Bloody Harvest is going down and we can face off against Captain Haunt and unlock all kinds of various skins and variants in Borderlands 3. Things from characters skins, weapon trinkets, weapons skins, and a new little buddy to have on Sanctuary III if we can collect enough of the ghostly stuff. All of which should persist after the event ends. Get ready for more hunting.

Everyone can take part in Bloody Harvest when it goes live in October, as it's the first of many free updates and events you can expect from Borderlands 3. For the duration of the event, any Vault Hunters who have departed Pandora for the first time and started exploring the far reaches of space aboard Sanctuary III will start to encounter Haunted enemies around the galaxy. These Haunted enemies are your key to accessing a new event-specific map, but watch out—the Ghosts that rise from the bodies of slain Haunted enemies will do their best to scare you to death. Coming into contact with one of these aggressive apparitions will induce the new Terror debuff, which partially shrouds your vision in a mysterious mist and weakens your gun handling, accuracy, and spread. As you explore the ghost-infested galaxy, you'll earn Hecktoplasm that can be turned in to Maurice, your scaly new pal who's taken residence aboard Sanctuary III.

Once you've earned entry into the Bloody Harvest map, beware: dreadful dangers abound at every turn. Look to the shadowy sky and you'll see winged Rakk-O'-Lanterns soaring through the air, eager to swoop down and breathe fire in your face. Tread lightly through a ghastly graveyard crawling with Maliwan goons who've reserved a burial plot just for you. Resist the urge to retch as you fight through a Ratch-infested pit with rivers of blood running through it. Should you survive these blood-curdling battles, you'll come face to skull with the Baron of Bloody Harvest himself. If you've been braving the many planets of Borderlands 3's story campaign, you might remember facing off against Captain Traunt, a gigantic Maliwan heavy soldier with some killer elemental attacks. He's back, albeit a bit bonier, as Captain Haunt, complete with some spooky new powers. Any who dare to enter the domain of this monstrous, bone-headed boss should be ready for one hell of a fight.

Of course, Bloody Harvest is also the perfect time to rock some costumes, and you'll be able to earn some new cosmetic rewards during the event. All told, you can add an ECHO Device Skin, a Weapon Trinket, a skin for each of the four Vault Hunters (which also apply to Moze's mech Iron Bear and Fl4K’s pets), and ultimately a Global Weapon Skin to your collection if you dedicate yourself to destroying the undead. There's also new Legendary loot to farm, including two guns and a shield that play into the new Terror mechanic, as well as a grenade mod. Additionally, new Anointed loot drops from Haunted enemies, Ghosts, and Captain Haunt will have a chance to have Terror-based modifiers. Here's a look at some of the spooky swag that you can only earn during Bloody Harvest.

Are you at all surprised that we are getting an event in Borderlands 3 so close to the launch of the game? DO you think that the area will feel truly new or will it just be a skinned version of a different map we have played before? DO you think that all of the mechanics in the game will carry over after the event ends or will the Terror fade after things die down? Let us know what you think down in the comments and then feel free to discuss. As we get more information for Borderlands 3, we will update you all here. All you need to do is be sure to keep checking back in on the site. We will make sure you have all that we can offer.