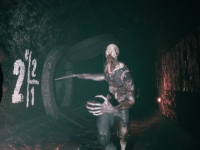 Daymare: 1998 has released and with that comes one more look at Daymare: 1998 to tantalize us all into joining the fear

Here we go with the latest in horror games to come just before the season as Daymare: 1998 is now out there for all those PC gamers out there. It has been yet another smaller title going around over the last few months with Invader Studios wrapping up all the work on it. Work that is now over as today is that launch day those interested in Daymare: 1998 have been looking for. You might also just be a gamer who wants a new experience and that is now available for you too. Well, obviously but we need to say it again to make sure that All In! Games grabs your attentions for the game.

With the launch of Daymare: 1998 also comes a new trailer to try to give us all a better feel for what is up in the game and what to expect. Sadly, it is more of the same we have had over the past months, but it is something none the less. This could all be for a good thing so we all do not get spoiled on just what is coming for Daymare: 1998 before we finally dive right in. For those out there that are worried about spoilers and all that. Either way, have a look and see if it will be your jam on the PC or if you will need to wait until it hits the consoles at a later date. I am sure that is still going to be a thing…

Raven is strong on the outside, but frightened and unsure deep inside, where the past torments him every day. He went through hell during and after his flight accident, and it stuck with him. Liev picking on him doesn’t help much either. But that’s nothing compared to what lies ahead of him. No matter if he calls it coincidence or fate, the fact remains that new demons are here to haunt him – and Keen Sight soon becomes his new hell. At least the monsters he encounters in the streets of the now-dead town can be taken out and left to rot in a pool of blood. Well, most of them. The question remains if getting through this alive will help him to find the peace he’s been looking for, or if this is just a start of a new torment that some might call a daymare.

Daymare: 1998 is now available to purchase, wishlist, or try out through a demo on Steam, to learn more about what’s lurking in a seemingly inconspicuous little town, overrun by terrifying creatures that once inhabited the area as ordinary people.

Have you been waiting for Daymare: 1998 to finally come or has it be a minor blip on your radar over the past months? Do you think it has shaped up to be a fun new entry into the genre or will it be something that fades into the background quickly? When do you think we are going to see all of this on the consoles or is that just another pipedream to let us all down? Let us know down in the comments and then feel free to discuss. If there is more for Daymare: 1998, we will have it here on the site for you. Just be sure to keep checking in and you will not miss a thing.