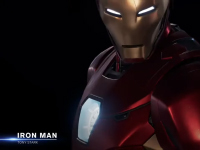 Here we go with the third character profile here for Marvel’s Avengers and it is the bigger name out there with Iron Man. Maybe not the biggest out of all of them, but he has made the biggest splash over the last few years when it comes to the core team. At least the core team that Crystal Dynamics is bringing to us in this game here. I mean, he was also the bigger name in all of the Avengers films too, so I guess it counts too. That is not to take anything away from him before the game hits the PS4, Xbox One, and PC on May 15th of 2020.

In this new and short clip, we get a little taste for what he will bring to the combat of Marvel’s Avengers and a few of the different looks here will have in the game. This would be the character that would be one of the easier ones to do that with as it is a lot of paint jobs more than anything. Although it would be nice to see some of the other armor designs make it all the way in for Marvel’s Avengers that would be more than just a paint job. Even the Mark I armor would be amazing even if it would feel quite off at first.

Flying in for the spotlight is the inventor and tech wunderkind — Iron Man! With his genius-level intellect, masterful engineering skills, and witty remarks, Tony Stark has a solution for every problem — except maybe himself.

What do you think about Iron Man here for Marvel’s Avengers and is this the character you have been looking for? Do you think that he is a little more lethal here in the video than we should have expected or is it all robot murder we are seeing? Could we see the vast difference in suits in the final game or will it always be just a paint job and nothing more? Let us all know down in the comments and then feel free to discuss. When there is more to share for Marvel’s Avengers, we will share it all here for you. Just be sure to keep coming back here for all of that and more.