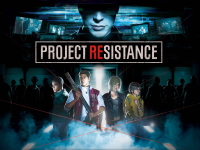 The teaser for Project Resistance dropped earlier in the week and now we are back with the full update as to what is going on with this game. Something that Capcom has been very coy about so far. Even to the point where we still do not know the final name for the game as Project Resistance is only a working title for now. It is what it is, but you would think with a closed beta for the game coming up in October that would be set a bit more. Oh, yeah, that is part of the news today as not only do we have information on the gameplay loop, but that there will be a beta to test off this multiplayer game here at the start of October. All on the PS4, Xbox One, and PC.

So, what exactly will we all be testing here for Project Resistance when it does come around. Well, this is a four vs one style game where four different survivors will need to team up to make it out of a facility run by one mastermind. The mastermind will be in control of setting up the rooms with monsters, traps, and weapons while the survivors do just what the name implies. There will be puzzles mixed in, just like any Resident Evil game, and all will be dictated by said mastermind. Before you get any worry, that is just a name given in general as that one player will also be able to take control of any of the monsters and the Tyrant in Project Resistance to add in an extra level of difficulty for the other players. All kinds of fun will be had here.

Today at Tokyo Game Show (TGS), Capcom unveiled a new type of survival horror set in the Resident Evil universe, Project Resistance (working title). This asymmetric online five-person multiplayer game combines both cooperative and competitive dynamics, with the opportunity for players to create their own survival horror experience. Four Survivors must work together to escape an insidious experiment and outsmart the twisted Mastermind behind the scenes. Capcom is developing Project Resistance in partnership with NeoBards Entertainment, utilizing the proprietary RE Engine known for high-quality gameplay and remarkable visual fidelity in games such as Resident Evil 2 and Devil May Cry 5. It is currently being developed for the PlayStation 4 computer entertainment system, the Xbox One family of devices including Xbox One X, and Steam.

In each four-versus-one match, one Mastermind player tracks the four Survivors through a network of security cameras, staying one step ahead at every turn to prevent their escape. The Mastermind plots a deadly course by wielding a strategic deck of cards to create dangerous obstacles for the Survivors, such as summoning vicious creatures, setting traps, manipulating the environment, and weaponizing security cameras. He or she can also directly control zombies in play. In addition, Mastermind players can even step into the trench coat of the towering, deadly Tyrant for the first time in franchise history. In turn, the Survivors must cooperatively work together as a team to fend off the Mastermind’s attacks and complete puzzle style mission objectives to escape the map before time runs out. Each Survivor possesses unique skills to help their team overcome the Mastermind’s challenges and survive the sinister experiment.

There will be a special early access opportunity to playtest this working project at TGS. In addition, Xbox Insider Program members and RE Ambassadors will be eligible for a chance to participate in the Project Resistance closed beta on PlayStation 4 and Xbox One. The closed beta will run from October 4 through October 7. Registration will be open between September 11 and 18. More details on Project Resistance and the closed beta will be revealed at a later date.

Did you expect Project Resistance to have all of these new little details or does it all seem like the way it should go for this kind of game? Are the many versus one model going to be the new norm after the Battle Royale has faded away again? How crazy do you think some of these "escape rooms" can be set up and will the beta get a better gauge for how players will use the tools? Let us all know down in the comments and then feel free to discuss. When there is more for Project Resistance, we will obviously have it all here. Just be sure to keep checking back in for all of that as we get closer to and past the launch of the game or beta. We will not let you down.